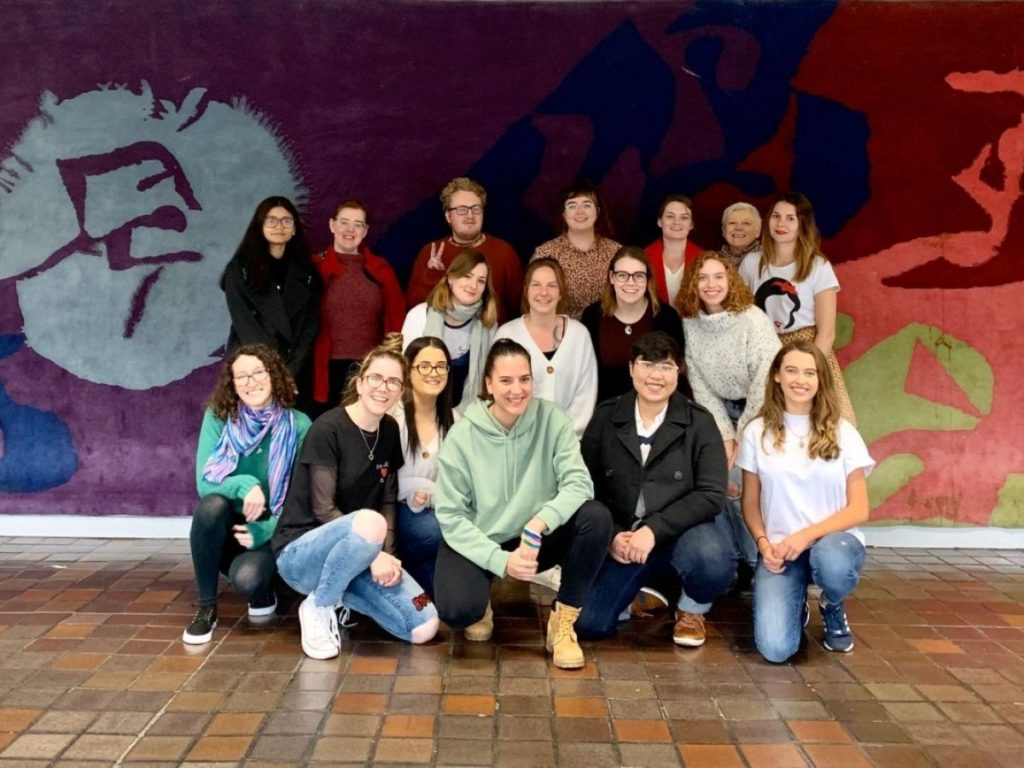 Mounting pressure to do well on an assignment is an all too familiar sensation for many of us students, not least of all for the poor souls grasping for their MA. Imagine how much worse that stress would be if this assignment was depended upon to continue a well respected tradition almost three decades long, and to provide funds for a worthy charitable cause? Well, that was exactly the insurmountable dilemma that the seventeen students of NUI Galway’s MA in Literature and Publishing faced at the start of this college year.

Each academic year, this MA class release the ROPES Literary Journal. Now into its 28th year, and at this stage well renowned within the Irish literary scene, this made putting together the 2020 journal a daunting prospect for deputy editor Gabrielle Reid and editor Emily O’Brien. “ROPES is an almost 30–year–old tradition now, and widely respected. No class wants to be the year to mess that up”, Gabrielle explains.

Gabrielle says that raising awareness about this project has not always been easy, as they always feel they’re “not reaching enough ears”. A majority of the class hadn’t even heard of the journal before joining their MA course to create it. However, they have received plenty of support across Galway to counteract this. Both Emily and Gabrielle hail Charlie Byrne’s Bookshop for being faithful advertisers with the journal, as are NUI Galway themselves.

Social media has also helped to garner much attention for this project, and Emily says that Twitter is their most active presence online, as it’s “very personable”, thanks to Mal working on the group’s social media. “The Twitter really gives the journal a voice and a personality, and followers get to see the people working behind it”, Gabrielle agrees. The seventeen members of the team may all be women, but there is no shortage of diversity amongst them. They all come from a huge variety of international backgrounds, including France, America, India, Canada, Indonesia and many more. Five of the members are Irish, but no two members of the group are from the same place. They also all vary in age.

While the group are still accepting visual submissions, all of their literary content has now already been chosen. These submissions cover a diverse range of themes, and were created by an even wider variety of writers. According to Gabrielle, “some kick-ass writers have come to the table” for the 28th issue. In particular, Emily has a soft spot for the submissions that make reference to Galway; “I’ll publish any poem or short story with the word Corrib in it basically”, she jokes. “It was definitely a case of quality over quantity in terms of the submissions received”, Emily notes, yet she agrees that they wouldn’t want it any other way.

This year, the group will be launching their journal in conjunction with the Cúirt International Festival of Literature, which takes place in Galway from the 20th-25th April 2020. The ROPES team are giddy with anticipation for this launch, which will be the result of an arduous process to create a journal they can be proud of, after many months of hard work. When first tasked with this project in September, the idea of going to print in March and being launched in April seemed impossible to the team. Yet, now that the submissions are in, their finish line is firmly in sight.

Besides its huge academic significance, another incentive for ROPES to do well is the worthy cause that will benefit from the journal’s success. This year, ROPES will be donating all proceeds from their publication to COPE Galway. After a vote was held amongst the class, it was not difficult to reach a group consensus as to why the women felt that COPE should be the recipients of their donation. “COPE do great work and are severely underfunded”, explains Emily, “They’ve also recently opened a new facility, and they deal with really relevant subjects for us, such as homelessness, the housing crisis and domestic violence”.

As well as supporting this great cause, anyone who purchases the book is also giving a huge boost to those who need it most within the literary community. “This journal gives a voice to unpublished pieces and authors. It contains a lot of diversity that you can’t always find elsewhere”, enthuses Gabrielle, while Emily says, “It’s great to showcase such a team effort, and to give a platform to writers that have never been published before. Overall, it’s a really wholesome journal”.

It’s not too late to be a part of this wholesome journal either, the group encourages! Visual submissions are still being accepted until the 14th of February. The group are also still appealing for funding towards their project. This can be donated through their Go Fund Me page, or you can support the girls by buying their merchandise. A limited number of ROPES badges are available for sale across campus or through the group’s social media pages.

Following ROPES online will be worthwhile in months to come for many reasons, as the girls tease that they have many exciting things lined up ahead of their launch and in conjunction with their Galway 2020 partnership. To keep up to date with the group, all of their social media handles are @ropeslitjournal.