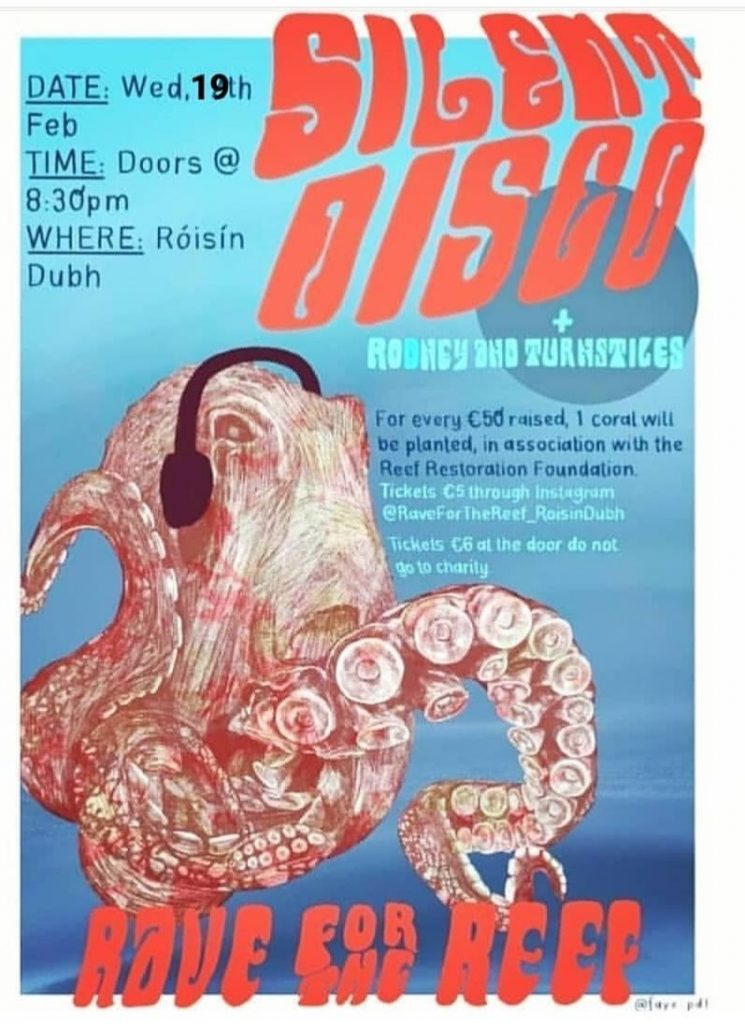 In October 2019, Gary Moscarelli raised €3000 for World Land Trust with his event ‘Rave for the Rainforest’. The charity silent disco was an absolute success with 33 acres of the Amazon Rainforest saved from deforestation.

This time Gary, a second year zoology student in NUI Galway, is joining forces with his girlfriend Louise McDowell to raise awareness for another urgent cause. This new event is aptly called ‘Rave for the Reef’. The silent disco, returning to the Roisín Dubh on the 19th of February, is raising money for the charity Reef Restoration Foundation.

The Reef Restoration Foundation are a charity of researchers that work with the Great Barrier Reef to replant and grow bleach resistant coral. The corals of the Earth are dying and the impact of this on climate change cannot be ignored. The continuous emission of greenhouse gases causes a rise in global surface temperature, which in turn causes a mass bleaching of the corals. If corals are bleached for an extended period, they die. This is what has happened to 50% of the corals in the Great Barrier Reef.

Why should you care about the corals? Well, they are a vital part of our ecosystem. Despite only covering 0.1% of the ocean floor, they host more than one quarter of all marine fish species among other marine animals. They also provide subsistence food, protection from flooding and help sustain the fishing and tourism industries. The loss of the coral will have massive economic, social and health consequences.

With the fires raging in Australia over the past several weeks, it is hard to ignore the effect of climate change. In fact, it was these fires that made Gary and Louise think of the corals in the Great Barrier Reef being deprived of light from the smoke of the fires.

According to UNESCO, the coral reefs in all 29 reef-containing World Heritage sites will cease to exist by the end of the century if we continue to emit greenhouses gases at the rate we are currently. This emphasises the need for charities like the Reef Restoration Foundation. For every €50 raised, a coral will be adopted, and with 400 tickets to sell at €5 a ticket, they hope to raise €2000, saving 40 corals.

The band Rodney also return to play live music, joined with popular Galway band The Turnstiles. After the success of playing at ‘Rave in the Rainforest’, Rodney have since been touring around Ireland playing in different venues.

The night has something for everyone, from live music to the silent disco. Gary and Louise are also hiring bubble machines for the night and encourage people to dress up in ‘sea-themed’ costumes, as they themselves will be.

So, if you want to help save the corals or just have a good night, don’t be afraid to attend ‘Rave in the Reef’ on the 19th of February. Send Gary Moscarelli or Louise McDowell a text for a ticket or message them on their Instagram page ‘raveforthereef_roisindubh’. Only tickets bought from Gary and Louise go towards the charity, so do make sure to buy from them!