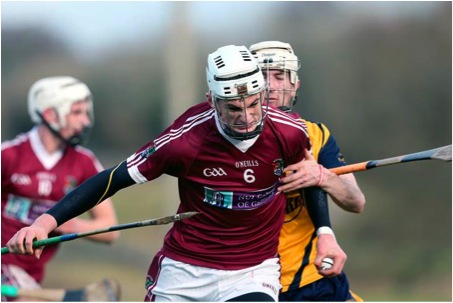 NUI Galway’s Fitzgibbon Cup side fell to reigning champions University College Cork in their first game of the competition at a score of 0-19 to 0-17. Evan Niland’s 12 points from placed balls were not enough to overcome the physically superior UCC side.

NUI Galway raced into an early three-point lead thanks points from Evan Niland, Paul Hoban and Kevin Hussey. The Cork side, however, replied with seven unanswered points of their own, turning what was a bright start into what looked like a long afternoon for NUI Galway.

However, Evan Niland’s accuracy from placed balls, as well as UCCs ill-discipline, brought the Galway side back into the match, going into the break two points down. NUI Galway returned with a vengeance in the second half, scoring four unanswered points – mainly thanks to Evan Niland’s supreme accuracy from frees.

Outside of the sharpshooting Niland, the Galway men had little to offer going forward other than a couple of impressive long-range shots from Michael Lynch and Sean Kennedy. This was also shown on the scoreboard, with UCC having ten different scorers in comparison to NUI Galway’s five. Saying this, discipline continued to trouble the Cork team. The lack of discipline resulted in only a score separating the two sides heading into injury time and the momentum was fully behind Jeff Lynskey’s men. It looked as though NUI Galway could pull back level. This, unfortunately, was not the case, as a seventh point of the match for Shane Conway proved to be the final nail in the coffin for the Galway side. NUI Galway will now play Cork IT on either the 22nd or 23rd of January in hope to try and get their Fitzgibbon cup campaign back on the right track.