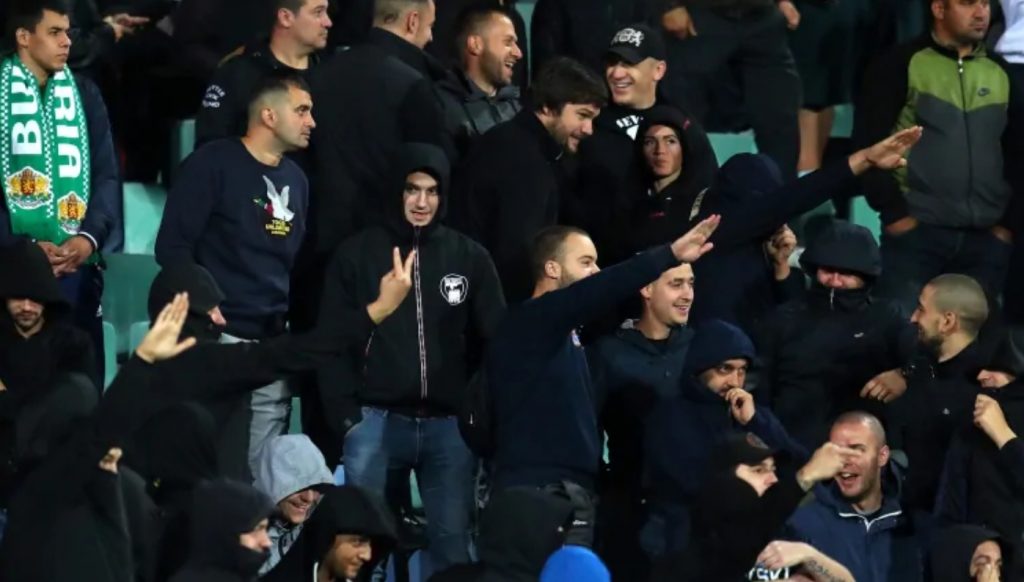 Racism has become a major issue in football and has been rampant in recent months. The main reason for this is because of the inability of organisations (like UEFA) to take appropriate action. The most recent incident occurred in the UEFA European Championship qualifying match between Bulgaria and England.

I watched the game and was disgusted to hear and see what was happening. The game was stopped twice due to racist monkey chanting, while there were images of Bulgarian fans projected on our screens giving fascist salutes. Raheem Sterling, Tyrone Mings and Marcus Rashford were all targeted with racist abuse.

The first stoppage in the game came on the 28th minute, and after lengthy discussions, the authorities followed UEFA’s protocol for dealing with racism.  A stadium announcement warned fans to stop the racist chanting or else further sanctions would be applied. The game was stopped again just before half-time, when further discussions took place between referee Ivan Bebek and England boss Gareth Southgate. If the racist chants continued, the second step of UEFA’s protocols would be initiated, which instructs the referee to remove the players from the field of play.

Another announcement would also be made calling on the racist chanting to stop. If this all failed, then the third step of UEFA’s protocol would’ve taken place, which instructs the referee to abandon the game. In fairness to the Bulgarian captain Ivelin Popov, he tried speaking to Bulgarian fans at half-time in attempt to stop the chanting. The game continued after half-time and England went on to win 6-0.

To hear the Bulgarian manager Krasimir Balakov in his post-match comments refuse to acknowledge the racist chanting during the game, because he was too busy concentrating on the game, was an utter disgrace. The day after the game, Bulgarian Prime Minister Boyko Borissov forced the Bulgarian FU’s president Borislav Mihaylov to resign, while the entire Bulgarian FU executive committee also resigned in solidarity with Mr Mihaylov. This has left nobody in a position to govern Bulgaria’s domestic and international games. Then, three days later, Bulgarian football manager Balakov resigned in solidarity with its President.

The Bulgarian Interior Ministry has said that police have identified 16 people who took part in the racist abuse directed at the English players. One thing that stands out is that UEFA did none of this. The hypocrisy by UEFA is unbelievable. They are against governments or states getting involved in their national football associations, but will happily let the Bulgarian government do the dirty work for them, yet they stopped the Irish government from getting involved with the FAI and its poor governance.

UEFA did charge the Bulgarian FU with four offences: racist behaviour, the throwing of objects, disruption of the national anthem and replays on a giant screen. These sanctions imposed by UEFA are worthless. It’s an absolute outrage that UEFA have continued to fail to deal with such a serious issue.

Their protocols are a joke. UEFA allow for thugs, not football fans, to have 3 goes of racist abuse directed at players before they abandon a game. UEFA should enforce tougher sanctions on countries and clubs who get involved in this sort of behaviour.

Once is enough and the game should be immediately called off, with the other team getting a 3-0 win and 3 points. After this, they should be forced to play behind closed doors for the rest of the tournament or league to send a clear message that this sort of behaviour isn’t acceptable. UEFA won’t do this, as they’ve shown through their protocols that all they’re interested in is the money and the games continuing despite racism occurring in matches.

One important point made by sports journalist Philp Egan was that people are forgetting the lessons of WWII and this was evident throughout the Bulgaria vs England game, with the Bulgarian fans using the Nazi salute. People have forgotten the meaning behind that gesture and the horrible history that is behind it and it’s worrying to see this creep back into, not just football, but society in general.

Lazio fans marched through Glasgow doing the Nazi salute before their recent game against Celtic in the Europa League. Again, UEFA failed to act. This type of behaviour cannot continue and it’s time UEFA stood up and took responsibility for what is going on because the world’s eyes are watching and we’re not happy, and the blame will firmly lie with UEFA for failing to act.