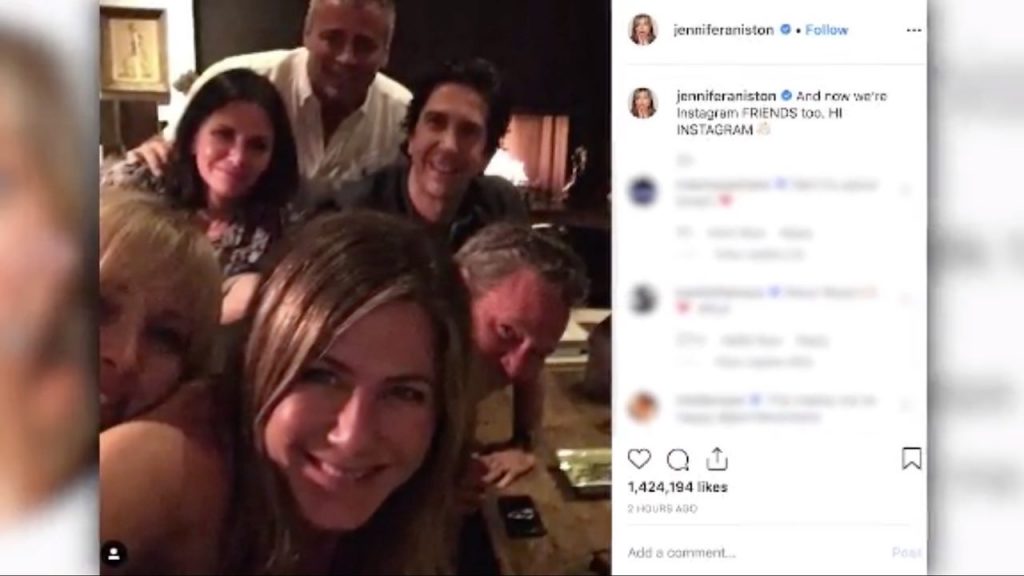 On October 15th, a day which will probably go down in internet history, Jennifer Aniston joined Instagram. FRIENDS fanatics quickly joined forces and followed the superstar on her brand-new account. In fact, so many jumped to follow the actress, Instagram ultimately “broke”. With her warm welcome to the social media platform came hilarious memes and tweets and the entirety of Hollywood welcomed Aniston with open arms, posting pictures in honour of her debut. Jennifer Aniston had achieved what Kim Kardashian attempted in 2014 with the cover of Paper magazine and essentially successfully broke the internet, without even trying.

Within hours, stories of the star joining the app were widespread and, a week on, Aniston now boasts 15.8 million followers. Of course, the fact that her first post was a photo of the main FRIENDS cast hanging out undoubtedly contributed to the excitement and rumours of a reunion, which soon circulated amongst hopeful fans like myself.

With the hype surrounding her new Instagram account, questions of the importance of Instagram arise, as one cannot help but wonder why even Jennifer Aniston, at 50 years of age, could not help but hop on the “Insta” bandwagon. Even with an estimated $220 million net worth and roughly 42 movies under her belt, the superstar decided to, like millions of others, post her life on the world’s second most popular social media platform. Instagram has morphed into something that is unlike any other social media outlet. Entire businesses and careers exist within the sequences of small squares that is an Instagram profile and it has created new abilities in terms of content creation. Bloggers no longer need a blog, businesses no longer need adverts, celebrities no longer need to go to a tabloid to break news or reply to a rumour; all of this is done from one app.

Instagram is the new business profile that everyone seems to need as is has the ability to showcase style, personalities, products, skills and entire lives, to potentially millions of people. As the second most-used social media platform in 2019, Instagram had 1 billion monthly users this year and so, the potential for reach and engagement is astounding. For small business and bloggers, an Instagram profile can contribute to immense followings, which often leads to various other opportunities in terms of the media and fame.

Mrs. Hinch, for example, set up her Instagram account two years ago. Her account began small and her content was simply cleaning tips and product recommendations. Since then, “Hinching” has become a popular phrase, coined by Mrs Sophie Hinchcliffe, who now has 2.8 million follows. She also has two books, has appeared on numerous shows such as This Morning and has recently befriended Stacey Solomon. This success came from her creation of an Instagram profile and is a poignant example of the success and fame which can be found from sharing cleaning tips, fashion inspiration, personal stories, whatever it may be, on the social media platform.

Instagram is the LinkedIn for all content creators – or anyone with a talent or story to share. The possibilities are endless when it comes to this social media giant and it is no surprise that even major celebrities such as Jennifer Anniston have caved and hopped on the Instagram bandwagon. The publicity that can come from a page or “story” going viral is insane, and the opportunities that go hand-in-hand with a growing audience are endless-advertisements, paid promotions, and even partnerships with brands. Stories take place and develop on Instagram and soon become the most talked about things that day, or even that week.

Jennifer Anniston’s debut saw the world transported back to the noughties with Reece Witherspoons involvement in the fiasco, and the amalgamation of Elle Woods and Rachel Green – two iconic noughties characters. Perhaps it was merely curiosity that pushed Aniston to join Instagram, and maybe it was merely the nostalgia of all things FRIENDS that formed the hype surrounding this story, but, the “breaking” of the internet depicts just how big Instagram is. With her decision to join, Jennifer Aniston became the most talked about person that Tuesday (which was a nice change from Brexit if you ask me) and the possibilities that come with this viral culture of “Insta” profiles cannot be denied. The proof is in the pudding – just one look at the millions of followers some people have, which allows for a brief insight into the possibilities for business, fame, money – whatever the desire may be. Serious success comes from Instagram and its importance in a modern world obsessed with scrolling and flicking through stories and profiles is undeniable. Even Jennifer Aniston could not resist joining the billions other people on one of the world’s most popular applications.