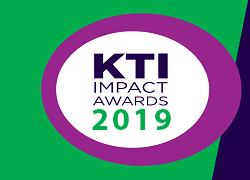 Last month, KTI, a business and research support company, released shortlists for their prestigious Impact Award and Achiever of the Year Award. Neurent Medical, an NUI Galway spin–out programme, is among the nominees on a 12 strong shortlist for the prestigious Impact Award, which recognises significant achievements in knowledge transfer and the commercialisation of research carried out in Irish higher education institutions and publicly funded research organisations nationwide.

Neurent Medical specialises in revolutionary treatments for ear, nose and throat conditions, such as rhinitis, and grew out of the Bioinnovate Ireland programme at the University.

The University has fared well at these awards in recent years, picking up 3 nominations last year

The Oranmore–based firm’s nomination follows on from other recent successes for the company, with founder Brian Shields scooping Enterprise Ireland’s Founder of The Year Award in June, in recognition of his commitment to building a world class company of the future.

Along with Neurent Medical’s nomination, a member of the University’s technology transfer office has also been nominated for the Achiever of the Year Award.

Entries were evaluated by a panel of international experts and submissions were judged according to criteria such as: the level of the impact delivered, the clarity and succinctness of the entry, the persuasiveness of the submission in outlining what it has achieved and why it is relevant to the category at hand, and the role that the local technology transfer office played in the activity.

The awards will take place in Dublin on the 21st of November in the Alex Hotel.

KTI director Alison Campbell spoke of the significance of these awards: “This is the 4th year that we have held the KTI Impact Awards, and each year it’s an opportunity to showcase the best practice knowledge transfer that is taking place in Ireland. Our Annual Knowledge Transfer Survey, published earlier in the summer, underlined the strength and performance of the knowledge transfer system in Ireland, and the value that businesses place on it. As Chair of the Judging Panel, I would like to congratulate the shortlisted entries and what they have achieved. I would also like to recognise the work that takes place in TTO’s (Technology Transfer Offices) all around the country. The calibre of shortlisted entries we see this year is testament to the work that these offices do”.