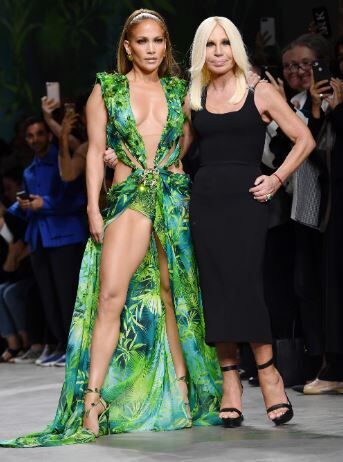 Move over Kim K, J-LO is breaking the internet, again. It’s been nineteen years since Jennifer Lopez broke the internet with that plunging animal print chiffon Versace dress at the 2000 Grammy Awards. It has also been nineteen years since the creation of the Google Image function, which we also have J-Lo to thank for. Back in 2000, Google had so many searches for the green dress, it created the Google Image search engine to cope with the problem. Fashion really is the way forward.

However, last week at Milan Fashion Week, Versace opened its vault and reminded us once more of the iconic moment when Lopez stepped out onto the red carpet with then–boyfriend Sean Combs in the sheer ensemble.

At Versace’s spring/summer showcase in Milan Fashion Week, a re–vamped version of the Versace dress was debuted by Lopez to mark nearly two decades since the iconic fashion moment.

The ageless beauty closed out the show and displayed the final piece from the animal print collection by strutting down the runway in an updated version of the 2000 green, silk dress. Lopez was joined onstage by Donatella herself, as the pair proudly displayed their twenty-year friendship.

The dress remained similar to the original, although it lost its sleeves and the green colour was more notably vivid and intense, with added embroidery.

Lopez recently revealed she was almost talked out of wearing the green dress back in 2000 by her long-time stylist, Andrea Lieberman, who didn’t want Lopez to wear the dress to the awards show because it had been worn previously by one of the Spice Girls and Sandra Bullock.

Back in 2000, the dress sparked curiosity for its daring low plunging neckline and sheer material, leaving décolletage, abs and legs on full display. As Jennifer walked on stage to present the first award of the night, it was the dress that caught the eye of the media, not the awards.“The dress was just provocative enough to make people interested,” said Lopez in a recent interview with Vogue magazine.

Since meeting at the Met Gala in 1999, Lopez has worn an array of Versace dresses to mark her biggest moments, both on the red carpet and onstage for her Las Vegas residency. “She was always sending me dresses for whatever I needed. It was a natural, organic relationship that wasn’t forced. It is a friendship that goes back many years,” said Lopez in an interview with Vogue.

In 2015, she attended the Met Gala with Versace in a sheer ruby red off–the–shoulder dress, and again in 2019, in a jaw-dropping sparkling Versace dress. For her fiftieth birthday party in Miami this year, Lopez donned a gold custom made buckle strap bodice Versace dress.

In a recent interview Lopez said, “One dress can change the directory of how people dress for the next ten years,” and how right she was. Fashion statements like this can solidify a celebrity’s career and a fashion house’s reputation for decades to come. The green dress certainly propelled Jennifer Lopez into a fashion icon overnight. Almost twenty years later, her signature super high slits, ultra-low necklines, combined with figure hugging silhouettes continue to influence the fashion world today.

Just imagine what Lopez is going to wear to the Oscars this year when she collects her trophy for Hustlers. Yes, we’re calling it now!