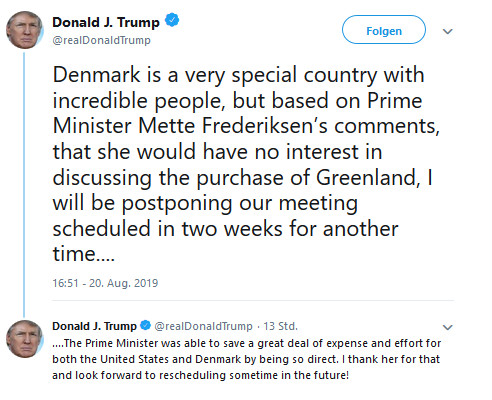 Donald Trump, the current president of the United States, has been embroiled in yet another farcical controversy – he has cancelled (or “postponed”) a proposed diplomatic visit to Denmark. The reason why? He made a bid to buy Greenland and the Danish Prime Minister called his attempt “absurd”. Has he finally gone mad, as a spokesperson for the Danish People’s Party has said, or has he been mad all along? Has this been the straw that broke the camel’s back for the Danish people?

Trump’s latest child-like hissy fit has caused ripples around the world, especially in Denmark and the Danish territory of Greenland, with it being covered on almost every journalistic outlet. He has postponed his visit to Denmark (“postponed” was his word and not mine, I doubt he’ll be going to Denmark before he has gotten his way in the Greenland purchase, but, of course, I could be wrong) and called Danish Prime Minister Mette Frederiksen “nasty”, just because she told, what most of the world thinks, is the truth about his frankly hilarious bid to buy Greenland, because who wouldn’t use Ms. Frederiksen’s words?

This has also brought out Trump’s sheer indecisiveness, with him calling Ms. Frederiksen a “wonderful woman” two days later, when he was talking about a diplomatic call Frederiksen made to him. That call was probably Denmark’s frantic attempt to repair the damage that Trump caused, with Trump possibly trying to repair the damage he caused too. However, I’d say Greenland wouldn’t be happy with the apologetic nature of this call, all they want to have to do with the US is probably the naval base that is already there.

One of the funniest parts of this is that Greenland is an autonomous region of Denmark – it is a self-governing island and thus isn’t entirely under the control of the Danish political system. Trump didn’t give the government or general public of Greenland a say in this joke. He asked the Danish politicians about this, and I’m pretty sure that the Danish government can’t make decisions for an autonomous region. He should have gotten Greenland’s say in this, not the say of a small European country which has little control over the island.

For example, let’s bring this a little closer to home. If the DUP and Sinn Féin had made an agreement and Stormont was sitting in Northern Ireland, this whole situation would be like Trump asking Boris Johnson to accept his monetary offer for Northern Ireland, without giving Arlene Foster, Michelle O’Neill, or any other member of Stormont a say in the prospective purchase. However, I am willing to bet that Trump wouldn’t call Johnson “nasty” if he called the idea “absurd” (which I doubt he would) – they both share sickeningly right-wing political ideas and, frankly, get along like a house on fire.

Trump seems to think this whole thing is a joke (which, if it is, and I doubt it, it has gone too far), with an image he tweeted of a huge gold Trump Tower photoshopped onto a picture of a quaint village, captioned “I promise not to do this to Greenland!” going viral with, you guessed it, various online news sources from around the world linking to the tweet. I’d say Trump is happy with the coverage the tweet is getting but it’s the wrong type of coverage, with people from around the world laughing at how naïve he is.

So the moral of this story (which is frankly ridiculous and really should not have happened) is that people can definitely go too far and when you are a public figure, this can cause an international backlash. As that meme that went around a while ago might say: “This is Donald. Donald makes himself an international laughing stock every week or so. Don’t be like Donald.”