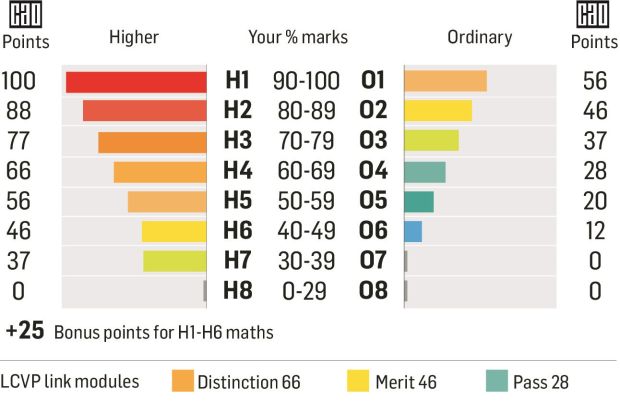 This year, the CAO points system did something new, for the first time in 33 years. Unfortunately for students looking to get into college in 2019, this is not good news.

Points for this year’s Level 8 courses have broken the rule of going in intervals of five. This year it has become a possibility to have a course worth 303 CAO points, rather than 300 or 305.

Why is this such a big deal, you ask? Well, it’s not sensational news or a dramatic change, but it would mean that students who received 300 points on the dot were 3 points short from getting into university, which would be a significant blow for the students, since it is practically impossible to get 303 points on the dot. Why did they change the system now? Getting into college and doing the Leaving Cert is difficult enough, without the stress of missing out by three or two points!

However, another part of this news is that, for the first time in years, there is a course worth more than 600 points! This goes against the entire system of the 600 limit CAO point system and the rule was broken by none other than UCD’s BSc Economics and Finance with a whopping 601 points!

It’s ridiculous how, instead of helping students get to university, the system ends up making it harder and causing a lot more panic and anxiety for students sitting the Leaving Certificate. Of course, universities have to limit the amount of course offers, due to the overcrowding issues most universities are having, however, that does not mean making it close to impossible to get one’s first choice!

This is something that will affect students’ performance, whether it be in a positive or negative way. My opinion is that it will mainly put more pressure on Leaving Cert students and make them fear university. I am curious about what will happen next year with the CAO point system. Will they pull another curve ball or will they go back to the previous scheme? Will grades have to be changed once again from H1s and O1s to something different, or will they change the limit of achievable points?

In my opinion, this change could also be limiting students in their Level 8 options and instead, will make them focus more on level 7 courses to get into their Level 8. In a way, this could be a great idea, as it could prepare students for assignments and university-style education. This change would provide for a smoother transition from secondary to university, which, in the long run, will be very beneficial for students, since they would deal with less stress upon the transition.

So, in conclusion, points have always been the cause of stress and panic, as well as confusion and frustration, but in my opinion, this change has been the gasoline on top of the already burning fire. One can only hope that next year, they will straighten things out, or at the very least find new ways of dealing with the ever-stressing sixth years!