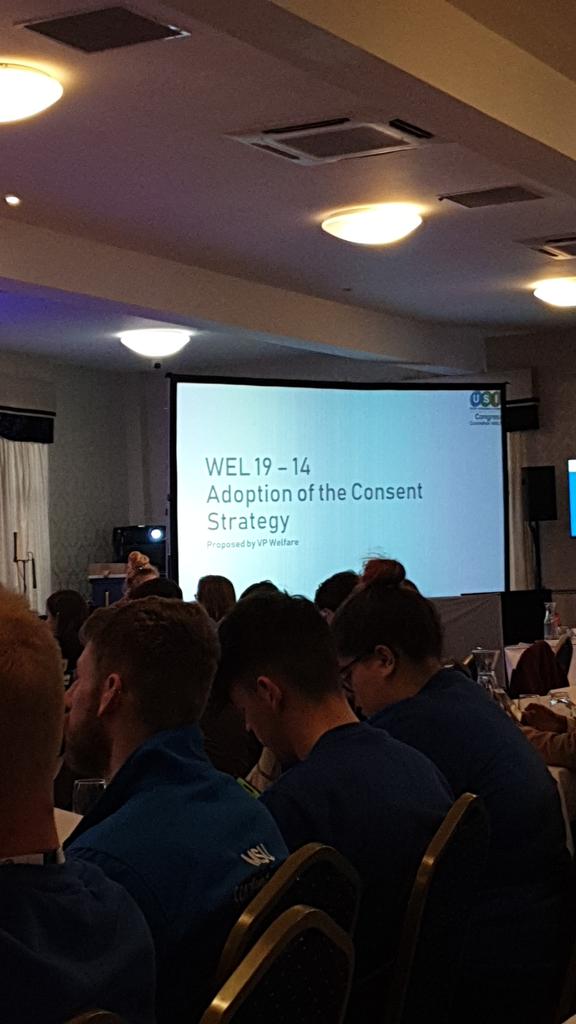 Students who attended the Union of Students Ireland’s annual congress 2019 voted overwhelmingly to adopt a national consent strategy campaign to be introduced in all campuses around Ireland.

Following a mandate that was passed at the 2018 congress, which SIN have previously reported on, the Consent Strategy was proposed by USI’s outgoing Vice President for Welfare, Damien McClean.

Lines of students graced the podium to discuss the motion to pass the strategy, with many sharing their personal experiences and stories. The memory of last year’s council was fresh in people’s minds, with many people citing the emotional, powerful and moving moment when delegates stood to vote with their polling cards held high above their head.

From data released by the Central Statistics Office, it is known that there was a 10.2 percent increase in sexual assault around Ireland from June 2017 to June 2018.

As well as this, according to Rape Crisis Ireland, 85 percent of perpetrators of sexual assault are known to their victims.

The USI Consent Strategy aims “to ensure Member Organisations (MOs) are best prepared to engage with institutional initiatives in relation to consent” and that USI will “support MOs in developing a sexual misconduct policy for their Union.”

The Union of Students in Ireland intends to introduce this strategy by providing training to all member organisations and provide “all necessary information for MOs to lobby and to be involved in developing, maintaining and reviewing all elements of a whole-institution framework” surrounding consent in Irish campuses.

Damien McClean stated that, “We need to have strong campaigns, consent workshops and education to prevent sexual harassment and violence and clear policy and pathways for reporting cases when they do happen.

“Our students deserve to feel safe in their institutions and this report has recommendations for colleges to protect those students.”

“We need students’ voices to be heard on this issue – women, men, nonbinary people, those with disabilities, ethnic minorities and those who are LGBTI+. They need to be included at all levels of implementation of this report to ensure that the recommendations are meaningfully implemented.”

The strategy will be implemented in the coming year and hopes to improve the services made available to students in the area of consent in Irish colleges.

The strategy outlines that the USI will “lobby the government to amend laws which affect students in relation to reporting sexual harassment and violence.”

“This is inclusive of prolonged delays in criminal proceedings which puts victims under duress, lack of availability to legal supports or advice or basic legal information so that students can make an informed decision, and provisions in the current laws which burden students with undue stress and difficulty should they choose to report a case of sexual misconduct,” the strategy concludes.