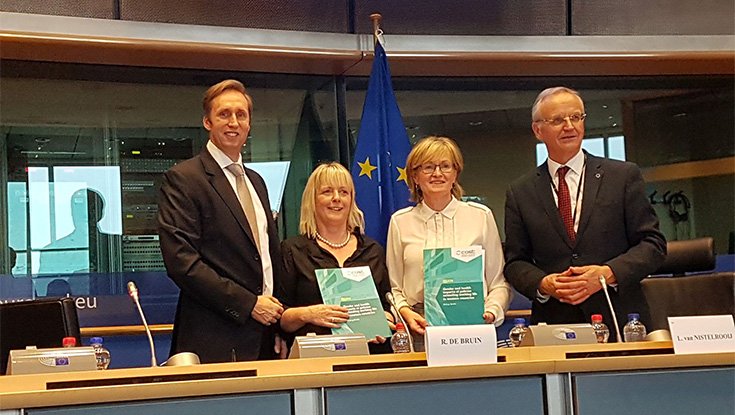 A group of NUI Galway researchers presented their work at the European Parliament last month.

Members of the COST Action research network from the Irish Centre for Social Gerontology at NUI Galway travelled to Brussels to present the research on March 6.

The policy briefs covered a large range, including age management, health, employment and care, inclusion, and gender and pension planning.

The COST Action research network has 140 members from 34 countries across Europe and beyond from a range of disciplines including social policy, sociology, business, gender, economics and health research.

The investigation was headed by Dr Áine Ní Léime of NUI Galway.

“With increased life expectancy comes the challenge of an ageing population and the associated increases in pension and healthcare costs,” Dr Ní Léime explains.

“Changes in working life policy can have gender or health specific implications. Working longer in labour intensive jobs such as cleaning or construction can have negative health implications at an earlier age, than for workers in other occupations. Older workers in precarious employment may find it challenging to find alternative employment as they grow older.”

“Women can be more heavily impacted than men by changes to working life policy. Women today often have lower pensions than men for a number of reasons: lower salaries, part-time work or taking time for caring responsibilities for family or children.”

Introductory remarks at the event were given by Vice President of the European Parliament, Mairead McGuinness, MEP, Mr Lambert va Nistlerooij, MEP, Chair of the Subgroup on Active Ageing, European Parliament and Ronald De Bruin, Director of COST.

The presentation was followed by a roundtable discussion involving European policy-makers and stakeholders affected by Extended Working Life from a gender and age perspective.

Each roundtable participant spoke briefly about the gender and health implications of Extended Working Life policy from the perspective of their organisation.

Policy messages from approximately 18 countries from the COST Action network highlighted the key policy priorities related to Extended Working Life in each country.

“The contribution of women is sometimes overlooked, particularly in rural areas and on farms, where their work is not always recognized or counted.”

“A special thank you to Dr Áine Ní Léime, who is the principal investigator into the implications of extended working life and I wish her continued success in her research.”