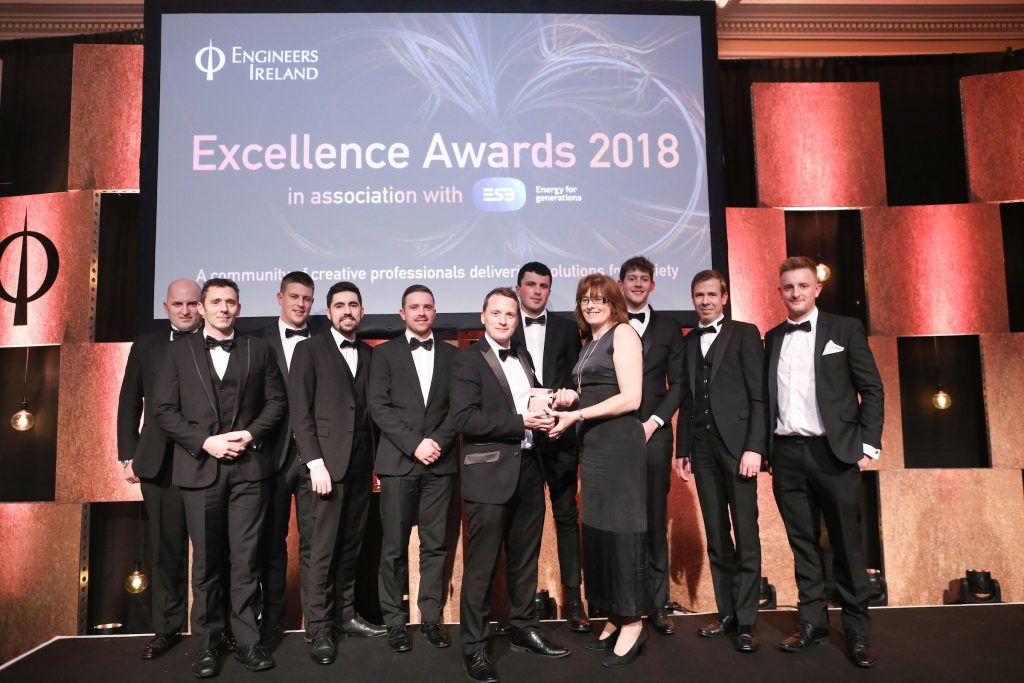 The innovative project received the Technical Innovation of the Year Award at the Engineers Ireland Excellence Awards in 2018.

The project was designed to alleviate wastewater from combined sewer overflows in Galway.

The sewage problem is a major pollution issue in the city’s River Corrib, and a source of pollution to Ireland’s rivers and estuaries.

A new model testing facility at NUI Galway has been built and designed by the partnership between the College of Engineering and Informatics and Ward and Burke Construction Ltd.

The new state of the art facility is one of the largest in Ireland.

In Ireland, the changing climate is resulting in more frequent rainfall and higher temperatures. Along with an increasing population, changes in Irish water systems are more important now than ever.

Anyone living in Galway is aware of the dangers of heavy rain and flooding. More intense rainfall is a stress to an aging water system and puts pressure on the 150-year-old technology in Galway.

This is a major environmental concern for the existing wastewater collection system. The current combined sewer system is outdated and insufficient.

The 150-year-old system was designed to collect both rain water and sewage water in one pipe system.

However, water running from households and streets tends to fill this pipe system quickly and overflow into natural water bodies before reaching treatment plants.

The old system is not designed to cope with modern day activity, and rivers are experiencing increasing amounts of raw wastewater from combined sewer overflow after short amounts of rainfall.

The proposed solution to this problem is to build a combined sewer overflow interception structure.

This innovative structure operates by collecting wastewater before it discharges and overflows into the environment.

The system will redirect the waste to a wastewater treatment plant for cleaning via a deep tunnel system.

Michael Ward, director of Ward and Burke Construction said the collaboration with NUI Galway has been “very productive for both parties.”

Dr Sean Mulligan, project manager and co-principal investigator from NUI Galway stated a number of alarming facts and emphasised the need for innovative water structures for public wellbeing and protection of the environment.

The project highlights the expertise of research staff and technical support staff at NUI Galway.

Stephen Nash, NUI Galway lecturer and co-principal investigator added: “The importance of having world-class laboratories is to collaborate with construction companies such as Ward and Burke Construction Ltd. This type of work helps NUIG to provide a first-class teaching experience to its students where they can engage with real engineering projects.”