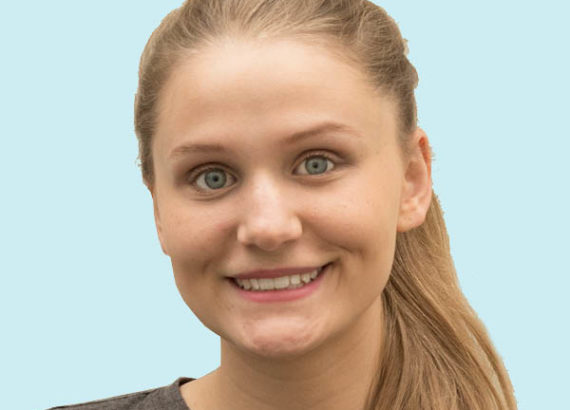 Liezel Ravenscroft is a third year Medicine student and the Students’ Union’s Convenor of the College of Medicine, Nursing and Health Sciences.

“The aspect of my role that I enjoyed most was getting to work with the academic side of the University. This year the convenors, as well as the postgraduate officer, got to be a part of the Academic Council. I really enjoyed having a say in how our University is being run, and the plans for its future.”

“The most frustrating part of this role was more to do with the course I’m studying. Due to being on placement in Sligo, I have found it harder than I thought it would be to participate in Union activities. This is frustrating as I thought I would be able to attend more meetings than I currently am, however this is out of my control and I’ll just have to make the most of the time I do get to help out!”

“If I was to go back, I would make sure to start working on anything I wanted to do much sooner! Even now in February, the year is nearly done, and it will be hard to make the changes that I wanted to.”

“To my successor, I would say to keep it simple. We all want to change the world, but when making goals be reasonable and take into consideration the resources available. Don’t set goals that you won’t be able to fulfil.”

“As well as that, have fun! Being a part of the Students’ Union Executive Committee is such a great way to meet people outside of your course and area of study. I have made some amazing friends this year, who I wouldn’t have met without being a part of the Union.”

“Unfortunately, I did not get to fulfil all of my campaign promises. Some of the issues have since been resolved through the college itself, and others I have since realised are just not feasible. However, I am still hopeful that I will be able to set out the groundwork for them so that my successor will be able to finish it off,” Liezel admits.

Most medicine, nursing and health science students are expected to complete some sort of work placement in order to graduate and qualify in their chosen field. However, this varies from course to course, and the Medicine convenor recognises this presents some challenges.

“Students are able to rate the academies in order of preference, and the college does their best to accommodate this. Due to this system, the majority of medical students are very happy with how placements are organised. Also, as they are there for two full semesters, they only have to pay rent in one location.”

“On the other side, for nursing, midwifery, occupational therapy and speech and language therapy students, it’s not as well organised. For placement, students can be expected to spend as little as one week in hospitals further away, such as Roscommon University Hospital, which is a two-hour bus journey away.”

“In this situation, students are often left to pay for a B&B, as the hospital is too far to commute to everyday. At the same time, this student will be paying for accommodation in Galway. This is problem that is often referred to when students talk about placement,” Liezel reveals.

“Placement is often the time that students really get a sense of what their future career will be like. When first starting placement, everything is exciting and new, and at first, staff take it easy on you so you can get used to how the hospital works.”

“However, after a while it can fade away. Once you are on placement, much more is expected from you, as now you are working on real people and that can be terrifying. The fear of doing something wrong to a patient, as well as staff being rude can often cause significant stress to students on placement. As mentioned previously, having to pay for accommodation in two places can also cause students to be stressed, as they might not be able to afford it.”

“For the next convenor, in order to understand other students’ problems, learn about placement in each of the different courses as there will be different problems associated with each,” she advises.