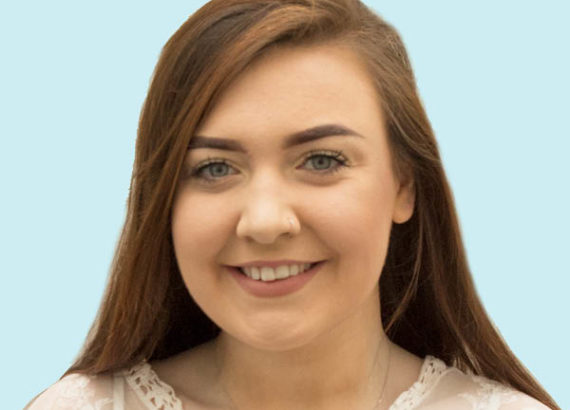 Clodagh McGivern is a second year Corporate Law student, and the Convenor of the College of Business, Public Policy and Law. She says the most rewarding part of being part of the Students’ Union was getting to meet loads of different people and helping each other.

“When I first got on to the Students’ Union, I didn’t actually know any of the other members, so getting to know all the people on the team and working with them has been really enjoyable. I’ve also got to meet plenty of other students whether they’re class reps from the College of Business, Law and Public Policy, or students who had a query and just wanted some advice or someone to talk to. From meeting all these people, getting to know them and doing little things to help them has been really rewarding and fulfilling.”

“It’s hard to think about something frustrating about the role because it has genuinely been an enjoyable experience. However, if I had to pick one it would probably be that everyday I’m learning and sometimes I feel like I don’t actually know what to do in certain situations and I feel almost clueless, which is pretty frustrating.”

“Sometimes I mightn’t know who exactly to contact about a certain issue or what to say to someone who is having difficulties. However, the Students’ Union is a team and with the help and advice from the other members this is quickly taken care of.”

Clodagh says there is only one thing she’d do differently. “If I had more time on my hands, I would’ve loved to get more involved in SU-related things like Mental Health Mondays because it really is an amazing idea, and the voter registrations because it is so important to practice your right to vote. So in regard to doing something differently, if I could, I would have loved to been more involved in that aspect of the Union’s work as its really fulfilling.”

Clodagh also says if you’re new to the Union, don’t be nervous. “Before I began my position as convener, I was so nervous as I didn’t exactly know what was in store for me. It was my first year being involved with the Union as I was never even a class rep before I decided to run for convenor. I’d tell my successor not to be worried and everyday you’ll learn something new.”

The Law student admits that she unfortunately didn’t manage to fulfil all of her campaign promises. “Sadly, I didn’t fulfil all of my campaign promises. The Students’ Union are pushing for more seating around campus, we even protested outside the quad with Chairlie the Chair. These things, however, take time. I am still a firm believer that there should be more charging facilities around the college, even if we introduced one of the charging stations in a few buildings around the college.”

Business, Public Policy and Law are all very different subject areas, but Clodagh doesn’t think it impacted her role. “Luckily for me, my course has a mix of both law and business modules, but even at this there still is a huge difference between the schools of Business and Law. Even as a Corporate Law student who does some Commerce subjects, the courses in the business area of the college were so different to me. However, I do believe that being a mix of the two was extremely helpful as I had a flavour and some understanding of both.”