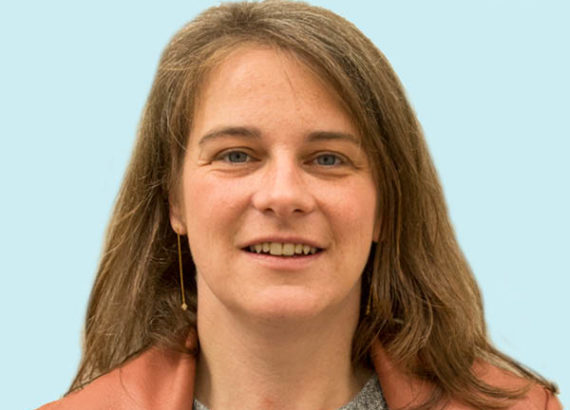 Eibhlín Seoighthe is a second year English, Sociology and Political Science student, and is currently the Students’ Union Vice President for Education. “I’m running because I think, with the same stance I took with education, I feel a need for more of a presence out there,” she says.

“I would love to be a good spokesperson for the students. I want to be directed by the students, I want to hear from them, and I want to know what’s going on,” she says earnestly.

“I don’t want to become a President that ends up sitting on too many committees, you don’t know what is going to happen with them, and things don’t seem to get done when you are sitting on so many committees… so I would like to keep the same level of engagement that I’ve had as SU Education Officer… or the engagement I’d like to think I have had,” she laughs.

“I would just like to continue that through, and hopefully bring it to everybody else on the exec as well… that’s another part I would look forward to, working with a brand new team,” Eibhlín adds.

With regards to her manifesto, Eibhlín says it is not set in stone yet but she has a few good ideas.

“I have been working with John Cox very closely this year, pushing to get funding for the library, and I would like to continue on with that.”

“Not even to change it because I don’t think there is anything necessarily wrong with it, I just think it needs a bit of a boost, so a bit of a lift… I think they are the key things I am looking at for the minute.”

Social spaces have been talked about by the Students’ Union for the last two years now, and the Education Officer wants to see progress on this front. “Social spaces are a big thing because we are moving towards an avenue of collaborative learning, shared spaces, group presentation.”

“It is a very long process to try and book rooms through buildings, there is so much demand for rooms… so that is another issue I would like to work on with the University as well.”

“And then, with the incoming Dean of Students [the replacement for the Vice President for Student Experience], this is another avenue I can focus on… I have already met with them; we have had a very good chat about where we would see things going forward for students.”

“If anything, we are going to have great opportunities to lead the SU into a better position to negotiate with the University.”

“The experience has changed so much… years ago there would be rubber duck races on the river, there’d be people playing football on President’s lawn, people would actually be out and about relaxing… and there doesn’t seem to be any space provided for that anymore.”

What is the reason for this change in the student experience? Is it that this cohort is taking academic work more seriously, or has the workload gotten harder? Eibhlín says it is a combination of things.

“There is a lot of pressure on students to get their degree, and to get out into the work force. It seems like we’re turning into what Marx warned us about, the ‘production line churning out students’, but what are we really gaining from that?”

“Is the student’s academic career suffering, we hear a lot about critical thinking and is that being lost, because we aren’t giving students enough time to enjoy the subject they are studying, and to enjoy the experience, and to develop those strategies to think, to learn patience, and to achieve their full potential?”

“All of that isn’t just to do with academic work, it is to do with student life in general and how you relate to the campus.”

Eibhlín also believes the University themselves should be doing more to promote student’s wellbeing. “Since 2008, our numbers have increased so much but our core funding hasn’t increased in those [student wellbeing] services.”

“Yet, we are spending money on Vice Presidents and developing new areas and new courses, but we are not providing the services for the students who are actually here.”

“I really do think the University could be doing more, and they should start investing the money back into the students… so that would be counselling, disability services, the health unit… even the SU.”

“We are the only SU in the country who don’t get money from their University,” Eibhlín says.

“There are so many things they could be doing but I think they are starting to listen though… but it will take time, and it will take a good strong Union to put the pressure on them, and to relay back what the students are telling them, to ensure the college are hearing them and understanding it.”

Eibhlín also says the lack of student engagement is a serious concern for the Union. “I don’t think it is necessarily anyone’s fault, but it’s the changing nature of the university. We are seeing a massive increase in student numbers, and with that it means we [the Union] can’t be out on the ground as much, which is an awful pity as we miss out on so much by being hidden away in our offices.”

The Arts student also says there is a need for a “shake up” in the Students’ Union. “I would like to think if I did get the position, that during the summer I would start working very early with the Dean of Students to look into how we can improve Fresher’s Week from the get go, and make it for all students as well, and give ye a real welcome back.”

“The President of the University is very amenable to doing things on campus too so there is good scope to work with all of these people.”

Eibhlín also outlines how she would work with a potentially 20 person Executive Committee. “I was trying to think how could we best utilise all of these people. I am hoping to sit down at the start of the summer and plan out everyone’s campaigns for the year.”

“Obviously things would crop up over the year, there may be the odd protest… party in the Quad!” Eibhlín laughs.

“As well as working with the USI, I would like to keep things local… for example seating or counselling. We were actually successful with counselling because we had a targeted campaign… we still aren’t seeing the extra seats but we are seeing movement in that regard.”

“Even getting the old Print That space for the ISSE survey, students are coming up to us, even staff are coming up and asking is this an SU space now and isn’t it great.”

Moving onto financial matters, Eibhlín wants to see the student levy reformed. “I would push for a referendum on this, with student support. I would like to see the €100 Kingfisher fee that is included in the levy gone.”

“I would like us to sit down and see where the money is going at the moment and how to best repurpose the fund to ensure the services that we currently roll out don’t lose out on any more funding.”

Éalú is a one-day festival that the Students’ Union are supposed to organise each year for the students. This was in exchange for the cancellation of RAG week back in 2011, and used to take the form of Christmas Day, which was cancelled this year.

When asked if she would organise an Éalú, Eibhlín says she would like to do something on campus but it would not be an Éalú-style event.

“A festival on campus, by students for students, is my idea. We would tap into all of our societies and ask what they would like to provide, and use the entire campus from north to south, and host a student-led, student festival, so that it is owned by us.”

“I’ve invigilated for different festivals around Galway before so I would be drawing on my past experience and bringing that all with me to the job, and again building those connections and reinforcing them, so that the students will benefit from it.”

The Education Officer also wants to bring in an academic rest week. “A lot of the staff is on board with the idea. I brought it to a recent committee, to see could we do something about it. It looks like it is going to be taken seriously, and actually investigated. This needs cooperation between staff and students.”

“The most important thing to me is making sure the student voice is heard. I don’t want to tell you what I am going to do for you, unless it is something that you [the students] want.”