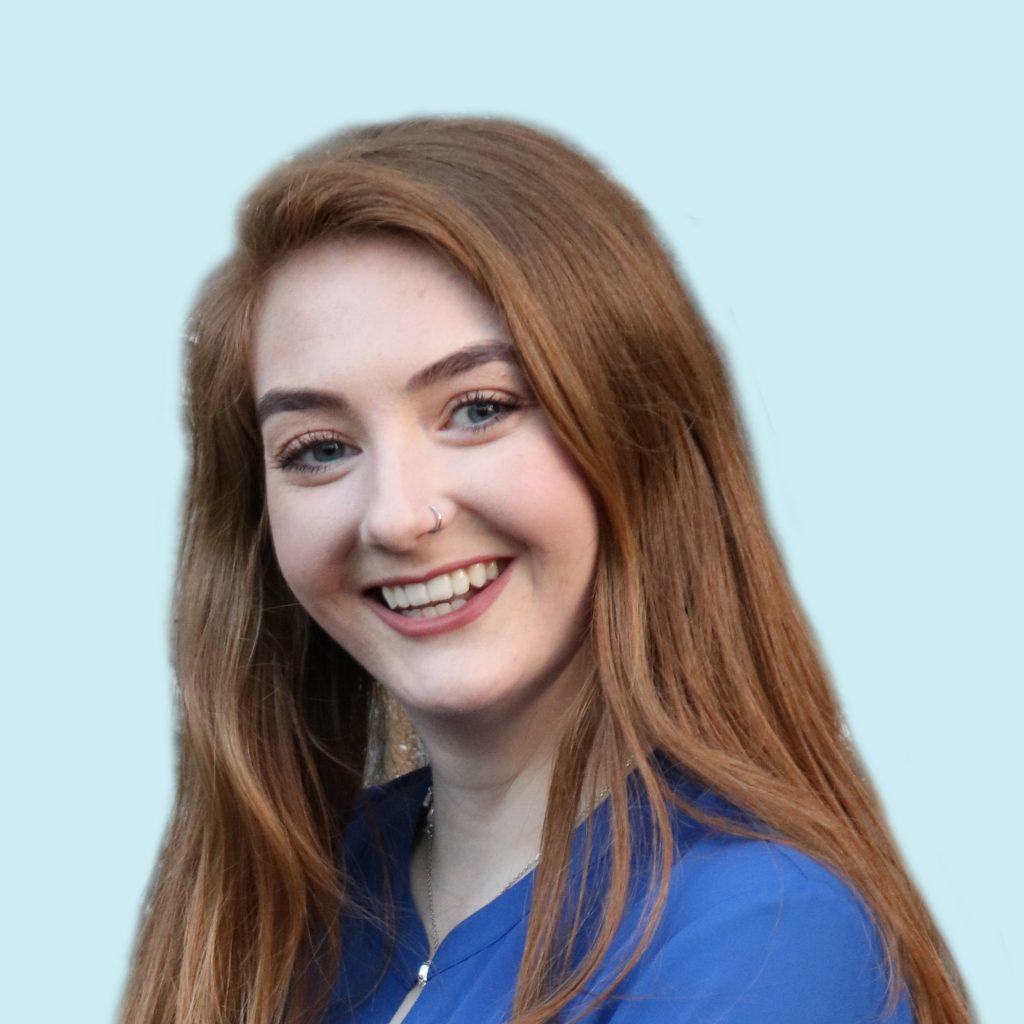 Clare Austick studied undenominated Science and graduated in Chemistry last October. She is currently the Students’ Union’s Welfare and Equality officer, and previously held the part time role of Equality Officer before that.

“I have been involved in the Union for the past number of years, I would have gotten involved early on in my studies, in second year and third year I was a class rep, which led me to run for part time Equality Officer, and then Welfare and Equality Officer last year.”

“This year in particular I saw how the Union could help students on an individual basis, but also by sitting on University committees and always constantly fighting for students, and through implementing policies.”

“So I guess I am running because I want to enhance the student experience for all, and I have learned so many skills this year, I saw how the Union can help students through so many different ways, whether it is through commercial services, the Students’ Union card, Leap Cards, then through the officers who meet with students on a regular basis and work on casework with them, through events… there is so much that the Union does that students might not be aware of, and it is just there in the background constantly fighting for student’s concerns and worries, and making sure that they [students] are always at the core of every decision that the University makes,” Clare says.

Clare’s number one point on her manifesto is university standardisation. “As a science student, I would have seen what it is like to be in an overcrowded lecture. I think everyone pays the same fees; everyone should be entitled to quality education, to get the best out of it so they can reach their full potential.”

“With the standardisation, I want to have a student staff liaison committee for every college, so the School of Arts currently has it, but I want to have this across the board, so students’ feedback is constantly brought to lecturers, and lecturers can run things by students, so they can work in partnership to ensure they get the best out of their education,” Clare explains.

“The second thing under standardisation would be to continue fighting for the module carry over system. That’s in the works, but you have to constantly fight for it and you don’t want to get that lost… even with the Vice Presidents and President roles, they are only a year-long period, so sometimes the things they fought for, the next person might not do that, so its making sure that it is continuous,” Clare adds.

Timetables are another thing Clare wants to tackle. “So for example have personal timetables, so there is more structure and management and organisation. At the beginning you are still finding your feet, so you may miss lectures or you don’t know where you are going… and that can be quite stressful, particularly if you are in first year or second year.”

Clare also says she tried to improve engagement this year, and will continue to work on it if elected. “I had Mental Health Mondays, so each Monday we had a different topic around mental health, to make sure students are looking after themselves. So I would have been on Concourse, and also on the North Campus, so it gave me a reason to go out and engage, get people to see my face, ask me questions, I handed out free fruit… and just let them know the Union is out there working for them.”

“And what I want to do, if elected, is to go around at the beginning of the year to student accommodations, so resident runs, and ask students what they want from the Union. Then in semester two I can come back and say ‘this is what I’ve done for you’.”

Clare also promises to tackle social spaces. “We had a little win there that the old Print That area is going to be a social space, but this is only one space in the amount of buildings we have, so we need to fight for that.

“There is a social space working group that I sat on, and again we need to push it and make sure this is always on the agenda, and anytime a building is constructed or renovated, that social spaces are always included in the new plan.”

Clare also wants to look at student services. She says that this year she led the Invest In Us protest on World Mental Health day, which resulted in the University allocating another €5000 to the student counselling service.

“It was great, but again still not enough. We are supposed to have one counsellor per 1000 students at minimum, but we need more staff, and longer opening hours. Same with the Disability Support Service.”

“We have such a diverse student population, we have international students, the highest number of students from non-traditional backgrounds, from the Access course, DARE, HEAR… but needs aren’t met.”

Clare says the biggest issue facing students today is higher education funding. “This Union exists because we are representing 19,000 students currently. But what about those who couldn’t come and be a student at NUI Galway because the fees were too high, or couldn’t afford accommodation?”

“I want to continue lobbying the government for more funding into higher institutions. I was elected to and currently sit on the USI Campaigns sub-committee, and we have a new campaign coming up called Fund The Future.

“It is calling for three things: investment into higher institutions, no fees and the restoration of SUSI grants. SUSI was cut by seven percent in 2011, and we have the second highest fees in Europe.”

“We need to put more funding into the services that exist. So counselling, DSS, buildings… we need to expand them and we need to improve them.”

“I want to fight for students who couldn’t access education, but also improve the standard and quality of the education for those who are already at NUI Galway,” Clare says.

The Welfare and Equality Officer also says constantly asking for feedback from students is invaluable because the Union are working for the students. She also says making sure there is always student representation at University committees, and at smaller working groups is key, because this will give University staff an idea of what students are actually going through.

When asked if there is anything she thinks the Union has failed on, Clare says that is a tough question. “I think there is always room for improvement.”

“Possibly the student levy. How it is broken down is there is an Áras na Mac Leinn fund, which students don’t really get to see the benefit of, so I would like to see that repurposed. So have core funding into specific areas such as clubs, societies, the Union possibly so we can run more campaigns, Flirt FM, and the Student Project Fund.”

“To have it [the levy] lowered, and repurposed, so I think the student levy is something that the Union at the time didn’t address. €100 of that goes to paying back the Kingfisher and the five percent interest rate on it, so I would try to scrap that,” Clare says.

Clare says a combination of protest and lobbying the University for more core funding for student services is the best approach. “We need to constantly bring these issues up. We must have it on the agenda, so it doesn’t get lost somewhere down the line.”

“We did not have an on-campus protest in I don’t know how many years, but when we did we got €5000 more in funding in semester one. I don’t think that will work all the time, but I think standing up for what we believe and saying it isn’t good enough, and we want more funding into support services is needed.”

When asked about Éalú, the one-day, University-endorsed festival that the Students’ Union are supposed to organise each year for the students, Clare says that we have a diverse student population, with people of all ages and backgrounds, and that should be celebrated.

“A sense of community is very important which you can get through communal events. Something that worked really well this year was the Christmas tree lighting. The President was there, he welcomed everyone, students and staff were there, and a sense of belonging was created, everyone was proud to be part of NUI Galway.”

“The President [of the University] seems pretty committed to that type of ideology, so have that every year, and then maybe have a summer barbeque that everyone could attend, and have that collaboration, collectiveness and connection with the community.”

“Éalú is something I would love to work on as well. So, just build on what Megan and Lorcán would have done up until now. Again, so students can integrate, and get to know different communities, and also be part of NUI Galway as a whole.”