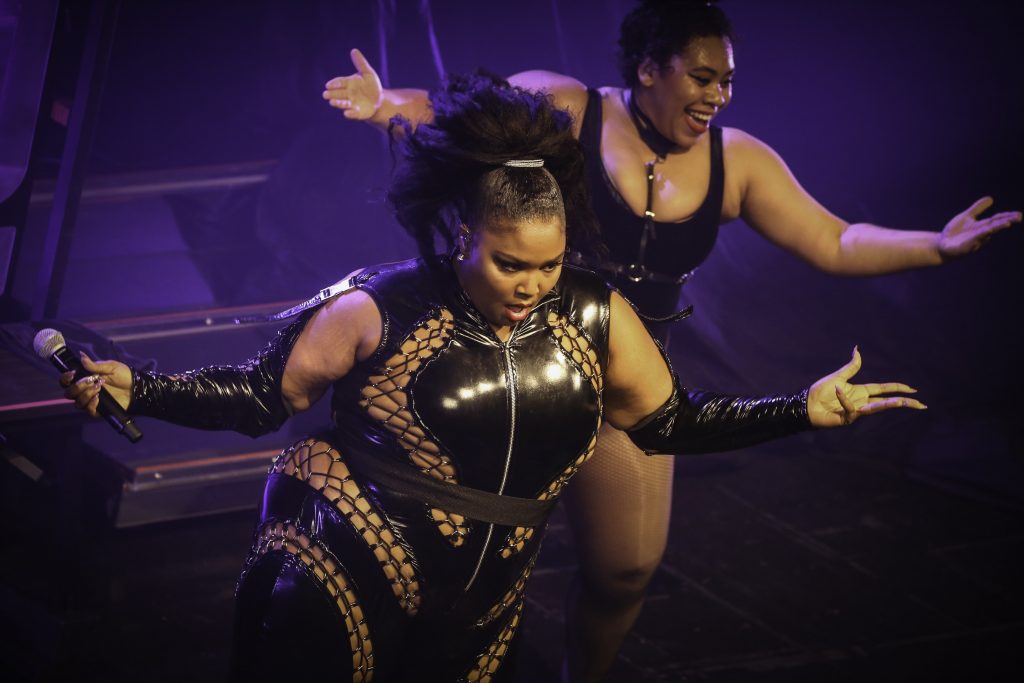 Whether you know Lizzo for her new track ‘Juice’, her guest judging on RuPaul’s Drag Race or her recent collaboration with Khloe Kardashian’s ‘Good American’ campaign, the singer/rapper deserves all the notoriety in the world.

Lizzo, born Melissa Jefferson, was born into an extremely musical family. A career in performance was always in the pipeline, picking up the flute at 12 years of age and studying music all the way up to college. The only thing standing in the way of a future of fame was herself. The way Lizzo saw herself had been tarnished from years of absorbing how the media treated plus-sized women of colour.

After the death of her father, Lizzo experienced some of the worst months of her life. Feelings of loneliness, shame and a belief that she was not good enough circled above Lizzo’s head until she realised that you will always look how you look. That you just have to accept it, be okay with it and learn to love it. It was this epiphany that made Lizzo who she is today.

The painful process of discovering yourself is something that everyone has, or will, go through and it is Lizzo’s openness and self-assurance that is so inspiring. The artist has been hailed as a “body positive icon” by Vogue and has loved herself openly and unashamedly in the limelight. In a recent interview with Allison P. Davis for The Cut, Lizzo revealed that ‘body-positive’ “is not a label [she] wanted to put on [herself]. It’s just [her] existence. All these hashtags to convince people that the way you look is fine. Isn’t that f****** crazy? I say I love myself, and they’re like, ‘Oh my gosh, she’s so brave. She’s so political.’ For what? All I said is ‘I love myself, b****!’”

Regardless, Lizzo embraces the title and is adamant that she will empower, inspire and include all people through her music and through her actions. Lizzo encourages her fans to saturate the media with as much positivity, love and self-celebration as possible so that one day we, as a society, can disassemble the preconceived ideals that have been ingrained in our psyche by the media without us even knowing. Unlearning the toxicity that has been force fed to us for so long is something Lizzo wants to encourage through her music and platform.

2016 saw the release of Coconut Oil, the EP which earned Lizzo her slot in the spotlight. This six-track album built up a foundation of strength around the singer, containing not even a hint of vulnerability. The stand out track of the EP has to be ‘Good As Hell’, a self-care anthem in which Lizzo takes on the role of an older sister, giving some solid life advice. This song encourages the listener to “boss up and change your life,” which is advice everyone, at some point in their lives, will need to hear. Growing as a human is personal, you have to do it by yourself.

Flash forward to present day, where Lizzo has just announced the release of her new album Cuz I Love You (April 2019) as well as having a North American tour and an appearance at Coachella in the pipeline! If you haven’t heard her latest tune ‘Juice’, you need to get out from under that rock. This feel-good single is so uplifting you can’t help but have a private little bop on your walk to college. Lizzo sings, “If I’m shinin’, everybody gonna shine,” which reigns true to her impact on society. She has empowered so many people to shine just as bright as her.

From touring with HAIM and Florence + the Machine to recording with Prince and conspiring with Missy Elliot, Lizzo has a firm grasp on her throne. Activist, LGBTQ ally, mentor, rapper, flautist, singer. An inspiration.