Another men’s fashion week, another @off____white collection with cherry picked references from indie streetwear labels? This time, the designs in question are a yellow graffitied ensemble from Cologne-based @colrsbaby by @punkzec , who showed his AW18 collection at @arisefashionweek in Lagos in April 2018, and a graphic from Manchester label @gramm . It could be a coincidence, but Virgil has been known to swipe designs from the fans he meets, some of who happen to be young creatives themselves. Interestingly enough, @punkzec met Virgil prior to one of his presentations in Paris in 2017. Think they talked design? • #colrsbaby #punkzec #arisefashionweek #lagos #streetwear #graffiti #hypebeast #hype #virgilabloh #offwhite #streetstyle #wiwt #ootd #gramm #hoodie #sweatshirt #manchester #cologne #snobshots #dietprada

The fashion industry today is a cut-throat environment. It’s a land of winner-takes-all mentality, and a place where trends can be copied in less than a second due to the presence of social media. High-end brands are not simply using models anymore, they are using ‘influencing’ personalities – paying those with a large number of followers an unfathomable amount of money to get images of their clothes circulating around the world.

In today’s setting, it is harder than ever for young designers to get their names out there, and if they share their creations without a trademark – they are up for grabs to the entire internet at a click of a button. Aspiring designers, who have spent countless hours earning their degrees, perfecting their skills, and working all hours as interns, can get discouraged by the current environment, especially when some big-name brands seem to be blatantly stealing their hard work, with no way to stop them.

Hence, the meteoric rise of the Instagram account, ‘Diet Prada’, is not surprising. The amateur account acts as an unofficial online watchdog, calling out designers who are copying other designers’ work. With over 1.1 million followers, including big names such Naomi Campbell and Gigi Hadid, the account is constantly gaining momentum, exposing unfaithful designers for the whole internet to see. People send in images of copy-cat work, and the public does the rest. The account was originally run anonymously, until founder 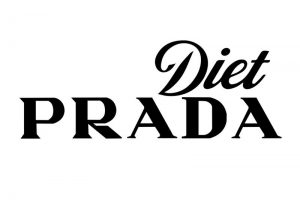 The need for the public shaming is viable according to many members of the fashion industry. Some high-profile cases exposed by the page include an incident involving Kim Kardashian whose children’s clothing line was accused by the page of being a copy of work by French designer Vetements. Kardashian spoke out publicly following the accusation, claiming the designs were ‘homages’ not copies.

Last year, Vivienne Westwood was criticized by a Vogue journalist for what seemed like a rip-off of work by young British designers Rottingdean Bazaar and Louise Gray. Westwood apologized following the article. Last summer, Gucci was also accused of stealing work. This time the claim came via Instagram from Olympic runner Diane Dixon, Gucci also described the work as a ‘homage’.

Some may remember the viral exposé of Moschino last year at New York fashion week by Norwegian designer Edda Gimnes. Gimnes put up a photo of her designs against images of the Moschino runway on Instagram. The young designer had shown her designs to the fashion house during a job interview, and the work was seemingly copied for fashion week.

“Today I woke up extremely disappointed and to a full inbox of people who know my work and saw yesterday’s Moschino collection,” Gimnes wrote online.

“I understand we are in an industry that carries inspiration from each other and as it is said, imitation is the greatest form of flattery. But it is disheartening to see, after having a meeting with someone from Moschino in New York in November last year, showing this person absolutely ALL my work and my original sketchbooks and ideas.”

“Seeing the Moschino show yesterday makes me so sad and I feel so hurt that someone has, the way it looks to me, unquestionably used my SS16 and SS17 collections as inspiration without granting me any credit.”

Caoimhe is currently working as fashion intern with Mary Kate and Ashley Olsen’s high-end brand The Row in New York.

“Fashion repeats all the time and people get inspired by things easily so it’s inevitable that there will be similarities in fashion, but the big brands should be responsible for encouraging talent and new thinking with jobs, internships and not promoting this ‘devil wears prada’ mentality of everyone in it for ourselves,” she explained.

Louise, who works with Vince Camuto in New York added that: “Fashion is exactly like politics. The bigger the company the more power they have against smaller people, the more they can get away with things. Think of Trump as a fashion brand, and think of Diet Prada as what he calls fake news.”

“The only other thing I would say is to get a more professional watchdog,” Caoimhe added. “I don’t know if that can really apply to the creative industry, because it’s a skill that everyone learns and builds upon and there’s specific garments you base it off. In college we are told that everything has been done before, so basically you take what’s out there and improve on it. So, copying is inevitable”

Because of this trickiness surrounding the idea of a professional watchdog for the industry, consumers are the ones who can make a difference. Shoppers can avoid funding cheap knockoffs by trying to shop vintage, shopping on sites such as Etsy, or buy buying from smaller independent stores.