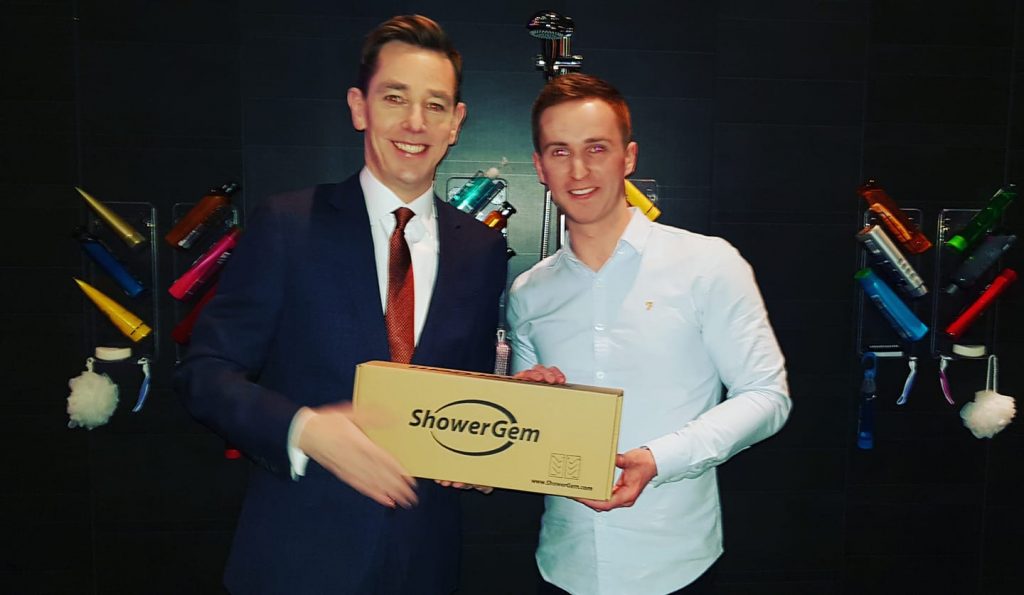 Seán McGarry, a former student of NUI Galway, wowed audiences of The Late Late Show on Friday 1 February with his invention the ‘ShowerGem Shower Caddy.’ The Westport native and Managing Director of ShowerGem spoke to host Ryan Tubridy about the easily installed, rust-free shower caddy.

Four years ago, frustrated with messy shower floors scattered with soaps, bottles and razors, McGarry’s father, Seán McGarry Senior, created a plastic shower caddy for his family home. McGarry Junior, seeing the product’s potential, began the process of turning the idea into a business. The innovation can store three bottles, a razor, a jar, soap and a hanging bottle or loofah. Angled shelves prevent the user from having to shake bottles to remove all the product, and glue designed to be used in wet areas also prevents the caddy from falling.

McGarry received the call to appear on The Late Late Show at half past five on Tuesday, some three days before the event. A bathroom had to be built in the studio and manufacturers were pressed to meet the newly projected demand. In regard to Ryan Tubridy, McGarry remarked that the host was “really easy going” and “calms you down.” Overall, the entrepreneur sums up his appearance on the show as a “unique, crazy experience.”

When questioned about what he found to be the most difficult aspect in setting up his business, the NUIG alumnus talked about manufacturing. “It’s really easy to create a product and just sell one of it. If you want to sell thousands, it’s hard to set the business up in such a way that you can make thousands in an efficient, short and cheap process.” All the company’s manufacturing and assembling processes are completed in Ireland, from the cardboard boxes to the shower caddy itself.

McGarry started off studying Undemoninated Science, and then majored in Physics here at NUI Galway. In 2015, while in third year, he won the top prize of €10,000 in the NUI Galway Students’ Union Enterprise Award for his simple mechanism. McGarry mentioned how much of a “great boost” this competition was to entrepreneurs in the college and how it was a “huge help” in developing the ShowerGem business.

To budding student entrepreneurs, McGarry’s advice is clear: “Don’t be afraid to pick up the phone and call people. Ask people with more experience than you who have been there before. You don’t realise how nice people are until you go and talk to them.”

In terms of future plans, McGarry comments that the company’s ambition is to increase sales in Ireland and the UK, with the possibility of targeting the US market. Further expansion in the home storage industry is also being discussed, in terms of smart storage inventions to suit both current and potential customers.

The ShowerGem Shower Caddy is available to purchase online, through showergem.com at a cost of €29.99 for a single pack, with thirty day hassle-free returns and free delivery to either Ireland, the United Kingdom or America.