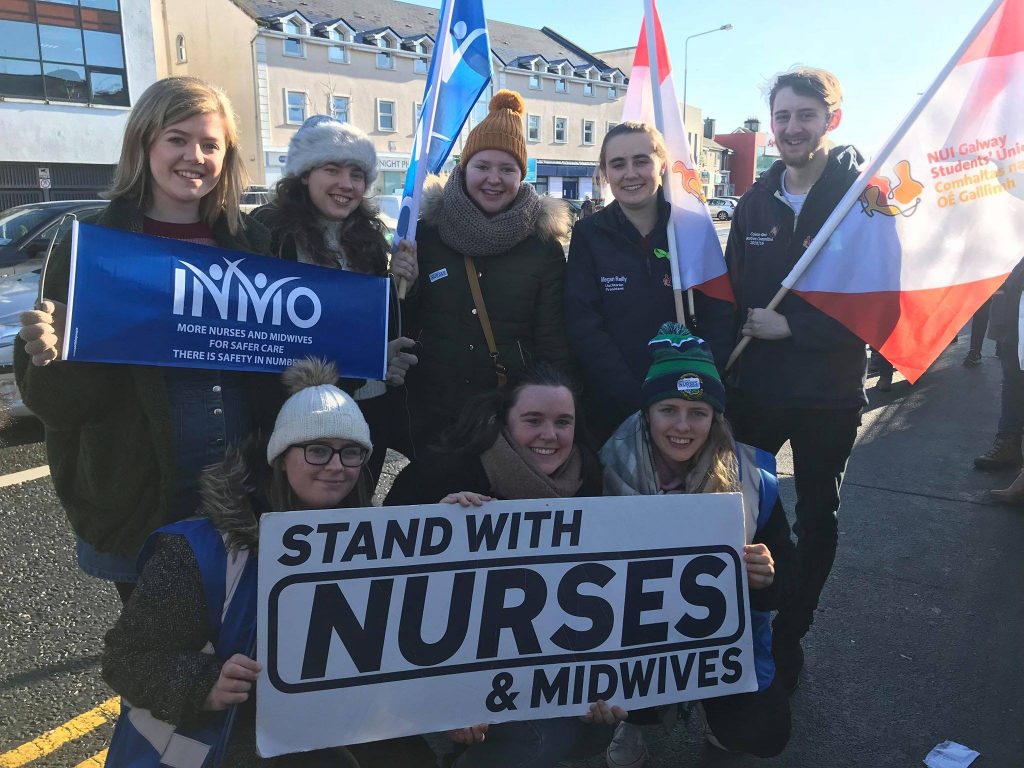 Update: According to The Irish Independent, the Labour Court has recommended that there should be an enhanced nurses practice salary scale in return for ‘productivity’ measures. The strikes have been called off.

The Irish Nurses and Midwives Organisation (INMO) held a strike on Wednesday 30 January, with nearly 30,000 nurses all over the country taking to the picket lines.

The INMO are calling upon the Government to introduce a 12 percent pay increase to bring Nurses into line with other medical staff.

Other demands being made are for more emphasis to be put on staff recruitment and retention in what is a seriously understaffed sector.

This could see a possible 240 services going on strike throughout the month of February, with a national rally being held on Saturday 9 February.

Ahead of the action happening this month, SIN spoke to some of NUI Galway’s student nurses, who are currently on placement in University Hospital Galway, to get their opinions on the strike and to see what life has been like being out on placement in the middle of an industry dispute.

When asked what the general atmosphere in the hospitals was like in the lead up to the strike, a student, who wishes to remain anonymous, told SIN that “the strike has been a cause of a lot of confusion and stress among staff and student nurses alike.”

“We did not receive a lot of guidance as to how it would affect us and what was expected of us. The staff were in similar situations, where guidelines and rosters for the strike were only given to them in the days running up to the strike.”

“Staff rostered on the days of the strikes are only allowed to provide ‘life preserving care’.”

Similarly, another student said that “the hospital has coped well with the strike, but the wards aren’t any busier than they usually are.”

“Staff, however, are very anxious about what draws the line on vital patient care and whether they are going to be paid if they go on strike.”

A third student gave her opinion on the strike in general, and why the nurses deserve pay restoration.

“Nurses don’t want to stay in Ireland and in the general wards in Ireland due to how bad the wage situation is.”

“The ward I’m in is extremely understaffed and there are very few senior members of staff – this creates difficulties for newly qualified nurses due to the lack of experience and support they would get from older members of staff.”

Our first interviewee agreed, saying that she backs the nurses striking 100 percent.

“It’s heart wrenching that it has come to this. All we want as nurses is to provide the best care possible to our patients, and whilst striking, we cannot.”

“Staffing levels in the hospitals at present are not safe. Nurses are run off their feet, caring for many ill patients of varying dependency with little to no help. Their job does not begin and end at the bedside and this deserves a living wage.”

The INMO strike has caused uncertainty for student nurses on placement in all sectors.

On the days of the strikes, nursing students on placement are not allowed to work for legal reasons as their supernumerary status could be compromised.

As well as this, a second year Nursing student due to go on placement on the week beginning the 11 of February said that, despite supporting the strike, it will cause uncertainty for her.

“As a result of the Government taking no action to resolve the situation, I will not be allowed to attend a specialized placement dealing with children with intellectual disabilities.”

“This is frustrating for me as we only get one week within this placement and I will miss out on a valuable opportunity due to the process of the strike.”

NUI Galway’s Students’ Union released a statement on Facebook supporting the INMO strike and posted pictures of the Union protesting alongside student nurses at UHG.

“We were proud to stand in solidarity today with Nurses and Midwives as they went on strike,” the statement reads.

“We chatted to Student Nurses and heard their concerns about placement, as well as the sector that they are going into and the options they have once they graduate.”

“In the sector they are under staffed, under paid, and vastly overworked. We want to see a better future for Student Nurses and Midwives, and all involved working in such a broken area of our healthcare system.”