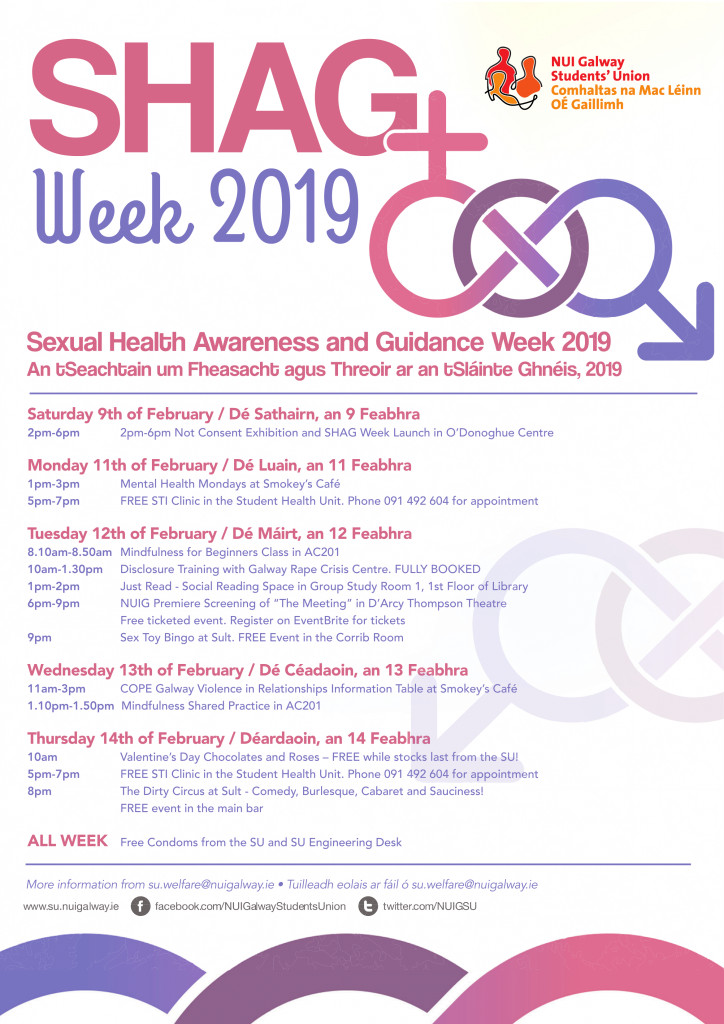 SHAG week is just around the corner with many events planned for the biannual sexual health awareness campaign.

The campaign is run by the Students’ Union, who plan events around campus for a full week to teach students about smart sexual health.

SIN spoke to NUI Galway Students’ Union Vice President and Welfare and Equality Officer, Clare Austick, about the events that will be held during this year’s SHAG week.

The introduction to SHAG will start off with a ‘Not Consent’ Exhibition on Saturday 9 February from 2pm-6pm in the O’Donoghue Centre, where people can explore what consent means and think about why consent is so important.

Mental Health Mondays will go ahead on campus as normal except with a special emphasis on the topic of Sexual Health Awareness.

Comedy Sex Hypnotist Michael McCoy will visit NUI Galway on Monday for a show in the O’Flaherty Theatre, tickets are €5 with proceeds going to Draiocht.

Sex Toy Bingo will take place in SULT on Tuesday February 12 at 9pm. The free event is always a big hit with students and “was packed last time, people were sitting on the ground and it was so crazy,” according to Clare.

Disclosure Training with Galway Rape Crisis Centre will also take place on Tuesday 12 February in The Space in Aras na Mac Léinn from 10:00am-1:30pm, students can pay a fee of €10 in the Students’ Union to attend the training, which is designed to increase awareness of the causes and effects of sexual violence and give participants an opportunity to practice scenarios involving a disclosure of sexual violence.

“On Valentine’s Day, the Students’ Union will be handing out roses and chocolate bars,” said Clare, while stocks last.

From 12pm to 2pm AIDS West will have an information table at Smokey’s café and will be taking over the Students’ Union Snapchat account.

The Dirty Circus will also be paying a visit to SULT at 8pm on Thursday 14 February. The event is free and not to be missed as it will be a night filled with “comedy, burlesque, cabaret and Sauciness!”

‘SHAG Packs’ will also be available all week from the SU Office, the SU Engineering Desk and will be handed out by the Union’s Welfare Crew around campus.

Free rapid HIV testing by AIDS West will also be taking place in The View in Aras na Mac Léinn on Monday 12 and Wednesday 14 February from 9:30am to 12pm and 1pm to 4pm.

The Student Health Unit’s free STI clinic is also open by appointment every day of the week from 5pm to 7pm.

“If people would like to volunteer in handing out roses on Valentine’s Day or to help with the sheets for Sex Toy Bingo, then feel free to get in contact with us at the Students’ Union,” Clare told SIN.

“I think it went pretty successful,” she said, and spoke about the feedback they received from the ‘Positive Pebbles’ that students were finding all over campus during the week.

The pebbles had little inspirational mental health quotes and positive messages on them.

Students were informed through the Students’ Union Instagram page that one certain pebble with a green awareness symbol, with a message on the back saying “You are good enough”, was hidden around campus somewhere, and the student who found this pebble was given instructions to bring it back to the Students’ Union office and they would be rewarded 10 points on their Students’ Union card.

More events in relation to SHAG week can be accessed from the Student Emailer and SU website with times, venues and fees included in the information.