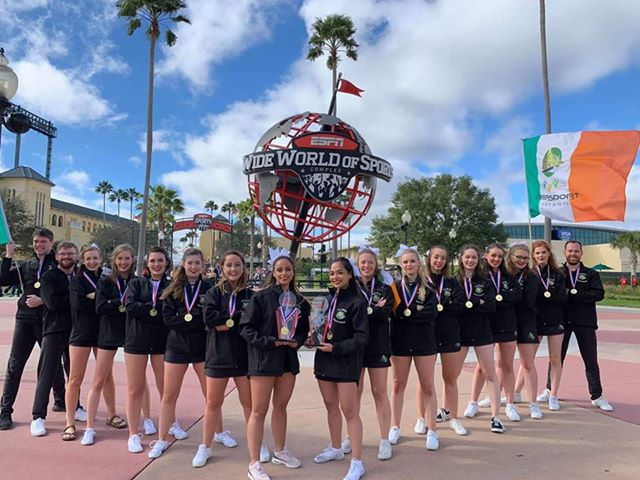 Rebecca Smith, Auditor of the cheerleading society in NUI Galway, told SIN how she got involved. “I joined the NUIG Cheerleading squad in my first year of college. I had always been involved in dance beforehand, but really wanted to try something new in college. I saw the society at Socs day and figured it would be a bit of a laugh. It’s such an addictive sport that I soon got hooked. This is my fourth year with the society, I joined the committee as a first year rep, and now I am auditor.”

Rebecca also explained why NUIG joined up with GMIT in order to represent Ireland. “We joined up with GMIT in 2017. The World Championship competition was trying to expand the number of European teams who competed, and contacted Cheer Sport Ireland to invite an Irish university team. NUIG and GMIT were the only teams at the time, and so we joined forces to make the best Irish team we could. Our biggest competitors became our best friends.”

The auditor also said that training for a World Championship was no easy task. “It literally takes blood, sweat and endless dedication. We started training last April, and continue all through the summer. We could train 12 hours a week, plus extra conditioning in your own time. To be a cheerleader, you need a resolution of steel to train through the pain and the tiredness and the bruises.”

“However, being on the World floor makes every second of training worth it. We push through every session as a team, we are more of a family than anything, and we support each other through all the good, and the bad. Its so much fun, you come out of every training excited for the next one,” she said.

Bex also told SIN what the best part of winning first place was. “The most rewarding part of winning is knowing that you did it together as a team. No routine can work unless every single member is dedicated to it. It’s so rewarding to know that every late night training, and every sore muscle was worth it in the end, and that we performed to the absolute best of our ability.”

So what’s next for our cheerleaders? “NUIG have a nationals competition in March that we are training for. Nationals is a great way for every member of the society to take part and see what a competition is like. We don’t plan on giving up our Worlds title though. We go straight into planning for the next World Championships. It’s early days so nothing is guaranteed, but hopefully we will be back on the World stage next year, stronger than ever.”

Rebecca also emphasised how everyone can get involved with NUIG Cheerleading. “We welcome everyone, from absolute beginners to pros. People can join recreationally just for a bit of craic, they can join to compete, they can just come along to our social nights to make friends and eat pizza.”

“We really just want to spread the sport of cheerleading through campus and for people to see it’s more than just dancing around with pom poms. If anyone wants to come along and give it a try, we train on Mondays in the stage from 6pm, and have conditioning classes on Wednesdays.”

“It’s an all inclusive sport which welcomes people of every shape, size, and athletic ability, it’s all for fun at the end of the day.”