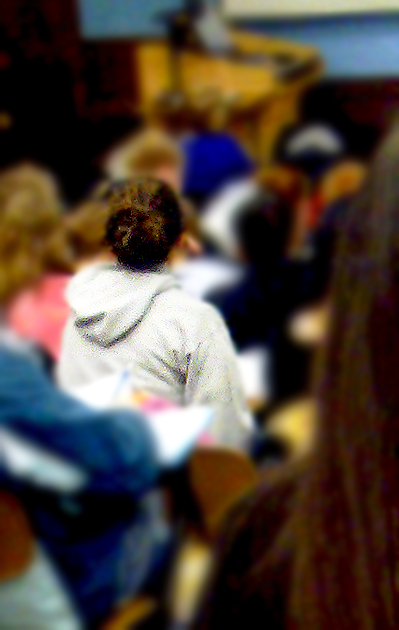 They are a little bit creased around the frontal dome. Their hair may be flecked with grey wisdom. Their gait and face perhaps hardened by experience. Many opt to sit in the front row of lecture halls like eager but obedient Jack Russells, desperate to absorb every syllable of the lecture while fanatically writing notes with the fervour of a fourth century monastic monk.

Yet mature students find themselves in the university bubble surrounded by fresh faced idealism and underdeveloped pre-frontal cortexes in a decision often stimulated by a personal dissatisfaction with earlier educational experience, and sometimes simply mandated by strict social welfare protocols. Either way, the mature student experience is singularly unique in its existentialist absurdity.

The Camus-esque sensation of negotiating modern campus culture while juggling external life such as children and work is certainly worthy of analysis. Early studies tended to highlight the declining cognitive capacity of advancing years as a possible obstacle to mature student performance, but just as phrenology gradually gave way to common sense, such studies were rapidly side-lined by new evidence that mature students are just as capable and competent as their younger counterparts, provided the learning experience itself is competently delivered.

Paula Foley, a second-year student in the denominated BA with Children’s Studies programme rates NUI Galway highly in terms of maximising the student experience. “I came through the Access programme and it was absolutely ideal for preparing us for the full degree programme, not to mention the fact that you meet other mature students beginning the same educational odyssey as yourself,” said Foley.

The Access programme has provided a vital pathway for mature students to return to education. A recent report found that such students of foundation courses went on to perform better overall than other cohorts regardless of socio-economic status or age. Access offers a rigorous but gentle introduction to student life and has produced numerous success stories since its inception on the NUI Galway campus.

As people age, evidence suggests that crystallised intelligence increases while fluid intelligence decreases. The former is a posh word for enhanced wisdom and ability to remove unnecessary information. An example of this may be mature students’ unwillingness to engage in traditional idealistic student activist movements or indeed participate in the many extracurricular options available on campus outside the lecture halls and seminar rooms.

Mature students perhaps have a greater need to manage time and are thus constrained from joining societies which may lead to a diminished overall student experience but is not usually reflected in overall academic performance. There is evidence of a higher non-completion rate of programmes for mature students which is often caused by non-academic factors suggesting a more complex external life beyond the campus twilight zone that may encroach on learning outcomes.

Many mature students return to university in pursuit of a previously thwarted childhood ambition and a dissatisfaction with their current employment and economic situation. Conversely however by entering third level, mature students are willingly reducing their earning power in the short term in order to access long term personal reward through the satisfaction of completing a degree programme. This may explain the often-quiet desperation of many who sit attentively at the front of the lecture hall, eager to please, desperate to stand out from the factory-like throng, and determined to optimise their intellectual experience even if it means challenging complacent and incompetent lecturers.

One study found that 66 percent of mature students entered higher education to enhance their career prospects with the remaining 34 percent citing personal and individualistic reasons as their determining factor. From this data we can reasonably extrapolate that those on the lower end of the socio-economic scale begin a higher education programme for primarily economic reasons although they too will have personal fulfilment as a factor, despite the economic hit that full time study engenders.

Vanessa Marovatsanga, a mature student undergraduate here in NUI Galway has expressed her gratitude and admiration for the support on offer for mature students: “Returning to college was daunting but the entire staff of the college have been great. The supports I have found here have been on a whole other level from accommodation to high tech software. It’s a really good place to be a mature student.”