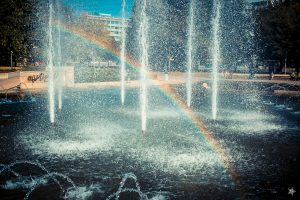 Plastic pollution is a growing epidemic and many conscious individuals are taking steps to cut down on their environmental impacts by using reusable water bottles. But when the bottle has run dry, it becomes redundant. There aren’t many, if any, places in Galway City to refill those reusable bottles, forcing a sad return to plastic.

This may change in the coming years as Social Democrat Candidate for Galway City West John Crowley has called on Galway City and Country Councils to install public water fountains and refilling stations throughout Galway.

Crowley believes that; “It is a win-win for everyone. There are both health and financial benefits with the scheme. Small practical steps like this will save money, reduce the use of plastics and improve our environment. It is the first of many, I hope, and a small practical step to stem the tide of single use plastics and therefore plastic pollution”

An NUI Galway published earlier this year revealed that 73 per cent of deep water fish contained micro plastics, an alarming statistic and a direct result of plastic pollution.

While the water stations won’t be a solution to the problem, they will certainly be a big step in promoting the use of sustainable solutions like water bottles and reducing plastics around the city.

As for the feasibility of the project Crowley stated, “Unlike many European countries, Ireland took explicit ownership of natural resources in its 1937 Constitution. Water, as well as the nation’s other resources, ‘belong to the State’. Since the introduction of Irish Water in 2013 the infrastructure is already in place to easily implement such a scheme if the political will is there.”

Crowley started a petition on Uplift.ie, ‘Provide public water filling stations & water fountains in Galway’. At the time of writing it has received 123 of the 200 required signatures.

In the meantime, reusable cups and bottles are still better than single use plastics. Not only will they be helping the environment, but with the ReCupán scheme can save you 10 to 20 cents at cafes and coffee shops around Galway.