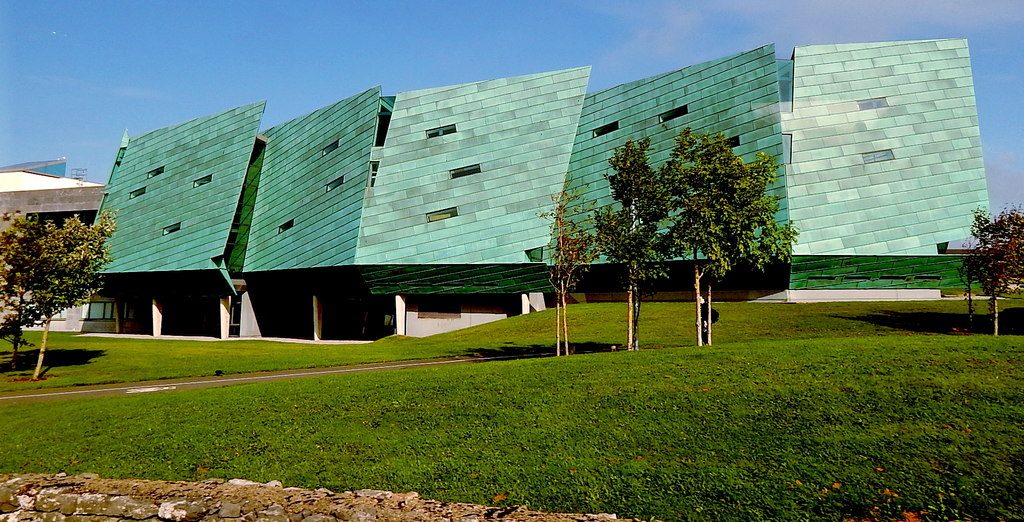 I stood outside GMIT umbrella in one hand phone in the other. It was a wet miserable autumn Galway afternoon, the rain attacking from all sides, flanked and buttressed by a cutting Atlantic wind.

Suddenly a verbal altercation took place, through the passenger windows of passing cars. One car ‘parked’  in the bus lane metres away from the adjoining bus stop while the other returned via the roundabout and stopped behind the first car. Two men emerged from each vehicle. A woman exited the passenger seat of the first car shouting and screaming and brandishing a mobile phone.

The fight was on.

A brief adrenalin – fuelled exchange lasted twenty seconds or so before both combatants succumbed to physiological reality. Neither were fit or healthy enough to engage in a prolonged duel. Nevertheless nine minutes of the most absurd and bizarre scenes unfolded, yards from the state of the art new Garda station. Two out of breath and overweight men proceeded to engage in a posturing dance while traffic was forced to grind a halt.

This all played out in the middle of one of the busiest roads in Galway City. I recorded the impromptu event for seven minutes until my battery gave in.

As the shaping and posturing continued I noticed the billboard in the background advertising a new non – alcoholic beer.

“The beer for when you’re off the beer” went the billboard’s caption.

Imagine a group of idealistic American tourists entering the city eager to experience the postcard friendly version of Galway that our local media never fails in promoting. A bareknuckle fist fight taking place in the middle of the road with the participants utterly uncaring about the consequences of their actions.

The fight, or rather the parody of what a fight is, fizzled out with one combatant shirtless and raising his hands in the air victoriously. Two uniformed guards emerged from the station after ten minutes and collared both road warriors. The men’s children in each car observed this carry on from start to finish.  An argument can be made that such behaviour is among the most psychologically damaging forms of child abuse.

I went on my way, footage saved and secured.

Would I share it? I questioned the rationality behind sharing or un – sharing. Recent political and media activity added an extra layer of curiosity to my dilemma.

I decided that I would indeed share it. This event happened. It deserved to be broadcast if only to shame the participants and possibly deter others from behaving so badly. I realised that the video would be used to rationalise the recent Peter Casey vote. The word ‘racism’ has been tossed around to smear the 300,000 people who gave the clueless Casey their number 1. Those people would seize on this video to bolster their views. The left of this country, the blanket disingenous left largely populated by middle class misfits, would generally ignore this video as it did not fit into their victims of an oppressive system narrative. Truth is often secondary to manipulation of such content.

The video quickly went viral amassing 60,000 views. The vast majority who commented, tagged, or shared enjoyed the surreal humour of the video’s contents.  There were a few ‘Vote Casey’ comments. Empathy for the children mostly came from female commenters.

In the meantime another video was posted online, recorded by the female passenger of the first car and offering a two minute close up of the initial burst of adrenalin to the background sounds of frightened children.

The occupants of the first car were eager to announce their victory it seemed.

Seeking official responses in the aftermath of such an event is largely pointless. Local politicians deliver condemnation platitudes such as the statement from the latest Mayor on the council conveyor belt Niall McNelis. Activist groups will offer sermons on inequality and socio – economic advantage with the big bad capitalist system responsible for such flagrant medieval dysfunction.

You are only allowed choose one of two positions in relation to such issues.

Whose side are you on? The debate is infused with egotistical emotion, blinding us to objectivity.

Ignore the rigid inflexible political framework of debate such events inevitably play themselves out within and ask yourself the question: How can a scenario where two adult men engage in a faintly comical brawl in front of onlooking children in full view of cars and pedestrians yards from a Garda station come to be? What are the forces that drive such behaviour?

Why would anyone engage in such behaviour in the 21st century? Why has 18th century duelling based practices persisted in this most ridiculous of manners?

Let’s not forget the basic rule of law that glues our society together.  We can excavate the multiplicitious and conjunctural factors of spatial and temporal complexity as one might say in a sociological paper but… the law is what prevents us from descending into anarchy. The law is supposed to prevent the criminals and the strong from preying on the weak.

The actions of those men require strong punishment.

A message needs to be delivered.

The rule of law applies to everyone.

Photo by Suzanne Mischyshyn on Geograph