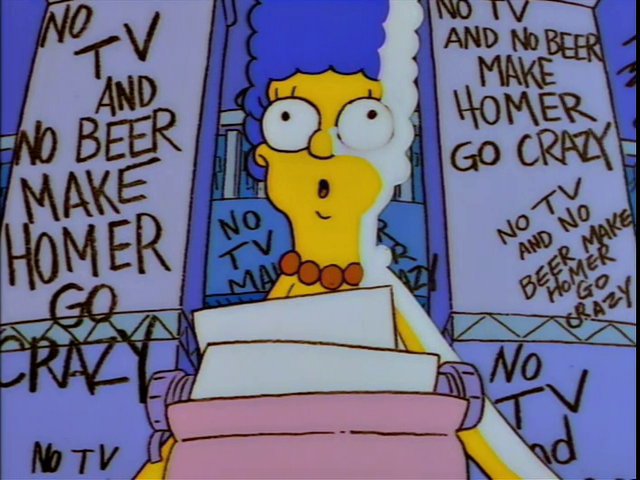 Looking for some programmes to get you into the pumpkin carving spirit? Have a ghostly glide through the list below…

No Halloween TV watchlist would be complete without this ghoulish staple of the long – running comedy series. This edition features a parody of The Shining as one of its tales, perfect for those who can’t set aside the time on 31 October to read through Stephen King’s tome or sit down to soak in Stanley Kubrick’s atmospheric screen adaptation. Give me Homer Simpson over Jack Nicholson any day.

A haunted house organised by a Sunnydale fraternity goes horribly wrong when the frat boys choose the wrong occult symbol to draw on the floor, unwittingly summoning a demon who brings people’s worst fears to life. No prizes for guessing where Buffy, Xander, Willow and Oz chose to spend Halloween.

A regular episode of this must – watch supernatural series would contain enough spooky goings – on and teenage snark to warrant mention here, but where ‘Fear Itself’ wins out over regular episodes of Buffy is how it capitalises on one of the series’ greatest strengths, magnifying the real – life angst of the transition to adulthood under the lens of the supernatural. In this case, the Scooby Gang are forced to confront their anxiety and unease as they settle into their first year of college life, or in Xander’s case deal with his sense of isolation as his friends venture into that brave new world without him.

Want Halloween TV guaranteed to make you afraid to go to sleep afterwards? Then, this is the one for you. After this sci-fi show’s revival in 2005, its lead had faced new alien threats as well as classic foes such as the genocidal Daleks. But no new monsters were quite as terrifying as the species featured for the first time in this episode. A race of ‘lonely assassins’ who take the forms of stone statues and can only move when they aren’t being observed, the Weeping Angels send their victims back in time to a point before their birth, feeding on the potential energy of the life they might have lived in the present.

When the story begins, the Doctor and his companion Martha have already fallen victim to the Angels. Thus, it is up to a young woman named Sally Sparrow (in an excellent guest performance by actress Carey Mulligan) to unravel the mystery of the Angels with clues the Doctor has left for her in the past, and prevent them from locating his TARDIS, which would allow them to feed on all of time. But all you need to remember is the most important message. Two words. Don’t. Blink. And keep an eye on that new statue your mam bought for the garden.