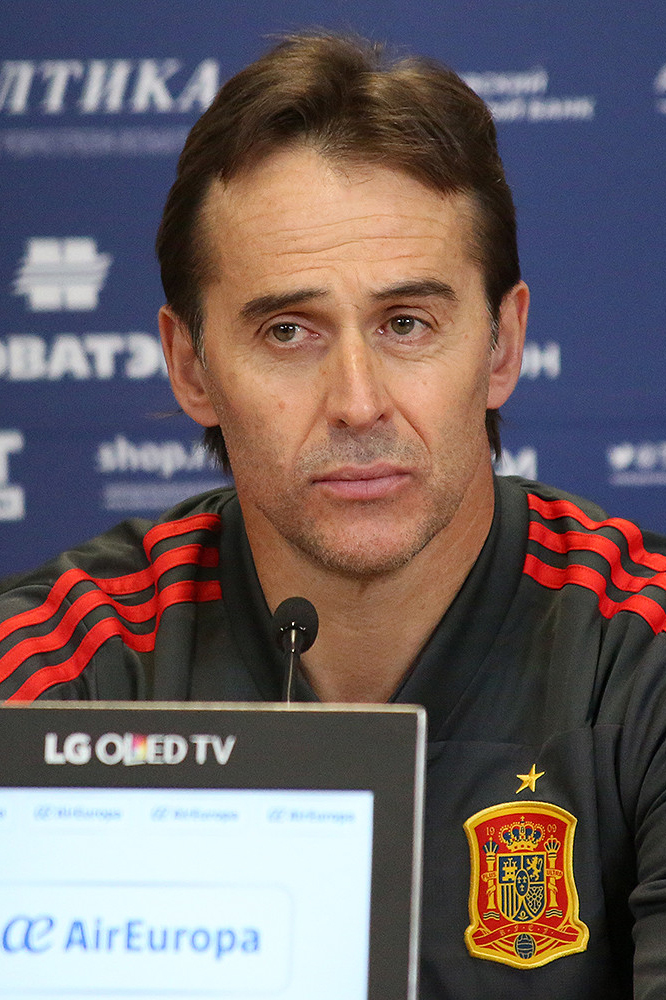 Lopetegui sat crestfallen, with one hand resting on a miserable looking face, as the Alaves’ faithful relished in their first victory over Madrid in La Liga since 1931.

Lopetegui’s misery is understandable. Madrid had now gone four games without scoring, a run which included a 3 – 0 defeat to Sevilla and a 1 – 0 defeat against CSKA Moscow in Europe.

Following this result, rumours began to fly that President Florentino Perez was actively searching for Lopetegui’s replacement. This is not a club historically known for their patience with managers. From Vicente Del Bosque in 2003, to the appointment of Jose Mourinho in 2010, they went through nine managers including names such as Vanderlei Luxemburgo, Fabio Capello and Manuel Pellegrini.

There are several factors weighing against Madrid and their coach. Not least of all the departure of talisman Cristiano Ronaldo. The five – time Balon D’Or winner departed for Juventus in the summer, and was not adequately replaced.

They did dip their toes into the market but not in the traditional Galactico’s sense. In the past, Los Blancos would have splashed the cash on superstars in the mould of Eden Hazard and Harry Kane.

In the last two summer windows, they have noticeably looked towards younger players. They have signed the likes of Theo Hernandez, Dani Ceballos and Vinicius Jr in an attempt to build for the future.

Lopetegui was a smart hire in this regard. He had blooded a younger generation into the Spanish national team, including Isco and Marco Ascensio, and he had great success managing the Spain under 19’s and 21’s.

While building for the future is refreshing for a club associated with snapping up all the biggest talents, this defiance of tradition does not help them right now. Vinicius Jr is only 18 and is experiencing his first season in Spain. He is not the answer, and expecting him to be is foolish on Madrid’s part, given his circumstances.

If Madrid seem intent on building for the future and have a coach known for developing youth, why does it seem like the ex – Porto boss is destined to fail only four months into this job? This lingering feeling has been present before he managed a single match. It is worth considering the controversial circumstances in which he was hired.

Flashback to late May 2018. After claiming a third Champions League win in a row, Zinedine Zidane stepped down as Real Madrid manager, claiming in a press conference that the club “needs a change, a different voice.”

A lot of big names were touted for the position: Mauricio Pochettino of Tottenham, Massimiliano Allegri of Juventus and Maurizio Sarri. Lopetegui, who at the time was the coach of the Spanish national team, was not a name that jumped to anybody’s mind, given the imminent start of the World Cup.

However, he jumped to Florentino Perez’s mind. Perez honed in and Lopetegui was announced as the new manager for the 2018/19 season on 12 June 2018, two days before the start of the World Cup.

The Spanish FA were furious with this decision. On 13 June 2018, Lopetegui was sacked and the head of the FA, Luis Rubiales stated; “there are ways of behaving, we couldn’t ignore this.”

This of course left Spain without a manager a day before the World Cup was due to start. It was an unprecedented and unique situation.

The sporting director of the national team, Fernando Hierro, was drafted in to manage the team for the tournament. Hierro was well respected in Spain but given the controversy, it felt like the Spanish FA were hastily putting a Band – Aid on a bullet wound.

Lopetegui described his dismissal as Spain coach as the “saddest day of my life” at his unveiling as Madrid manager. He broke into tears as he was applauded by onlookers. He then proclaimed that “today, is the happiest day of my life.”

Four months on, and happiness has not followed Julen Lopetegui and Real Madrid to Sevilla, Moscow or Alaves. The loss of Cristiano Ronaldo and the lack of action to fill the immediate void left by him would hurt any team. There is no denying, however, that the events of June 2018 have had an impact on Lopetegui during the short time he’s been in charge.

He is both unique and unfortunate in that his reign is destined to be defined by events surrounding his appointment. Poor results are not helping his cause.

If Florentino Perez soon pulls the trigger on the former Spain and Porto boss, he will be remembered as more of a Vanderlei Luxemburgo than a Vicente Del Bosque at the Santiago Bernabeu.