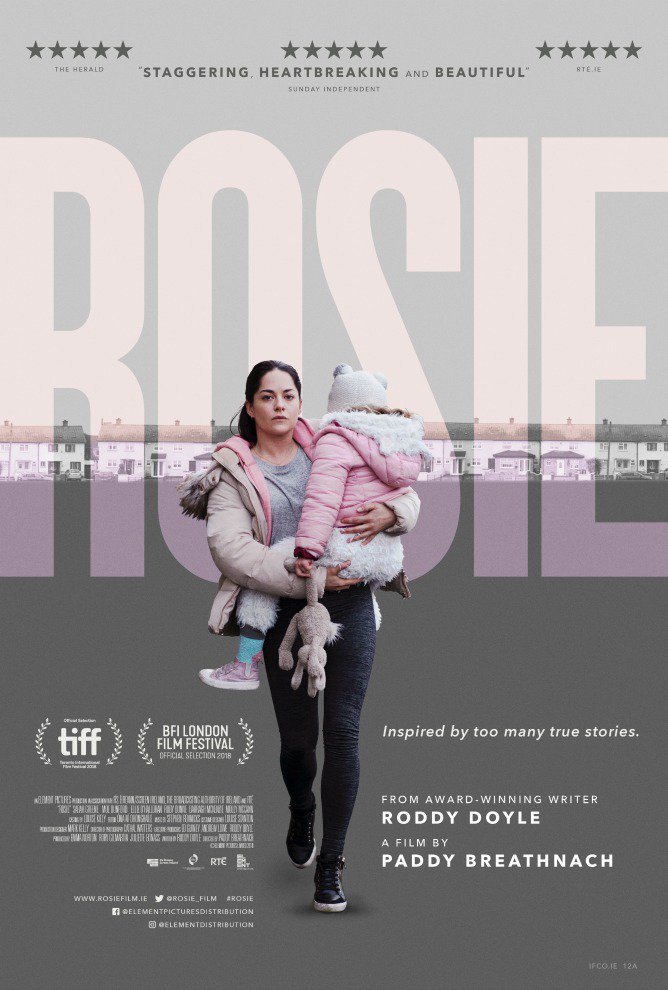 This poignant and deeply affecting film serves as a visualisation of the Irish housing crisis, giving a face and a pulse to the anonymous battle of so many people. Pálás Cinema invited SIN to a screening of this beautiful and moving tale before its initial release. One family’s 36 – hour struggle to secure a safe lodging for the night is condensed into an 86 – minute film. Penned by Roddy Doyle and directed by Paddy Breathnach, this is nothing short of a masterpiece.

The movie kicks off with a compilation of news reports on the worsening state of the housing crisis. We are introduced to Rosie, who is embodied by Sarah Greene in a stunning performance. Rosie is a gracious, working class woman who is working tirelessly to find her family of six somewhere to live after finding themselves suddenly without a home when their landlord decided to sell their house. Working through a list of potential places to stay, Rosie develops a refrain, repeated throughout the film like a prayer; “We’re looking for a family room for a week … a few days? … even just one night?”. With each utterance, the hope diminishes more and more.

With their entire lives stuffed into a couple of bin bags, the downtrodden family are crammed into a small family hotel room for a single night. What was once a luxury now feels like a prison cell. The word ‘homeless’ is treated as a profanity, a slap in the face of those who are desperately trying to keep up appearances. With a weary optimism, the family trudge through the uncertainty of their situation. From schoolyard bullying to getting ready for ‘bed’ in a chipper’s bathroom, the sudden realisation of the bleakness of their fate becomes apparent.

Cathal Watters, the cinematographer, captures so much feeling in moments where so little is said. The handheld close – ups of the kids exquisitely showcase their uncertainty, innocence and simultaneous lack thereof in times of great turmoil. Condensation on the car’s windows represents the claustrophobic nature of their temporary home which seems to shrink as life closes in on them.

The music by Stephen Rennicks allows us to feel the moments gaining significance in the pit of our stomachs. The culmination of impeccable cinematography, powerful music and a stunning performance by every single cast member left me with a tear in my eye and a lump in my throat.

With each scene, you find yourself becoming increasingly inflamed with rage. You are left questioning a very broken system. Up until this point, I had taken for granted the luxury of having an address. Of waking up in a familiar bed every morning. This movie challenges the preconceived stereotype that so many have of homeless people. Rosie and her family are working class, respectable people who have fallen on unbearably hard times. It could happen to anyone reading this in our current economic climate, and that is why this movie is so poignant. It is a demand for change, for improvement.

This movie is set to go down in Irish film history. It is not one family’s sob story; it is the reality of “too many true stories”. It is a call for change, and it will not go unnoticed.

With special thanks to Pálás Cinema