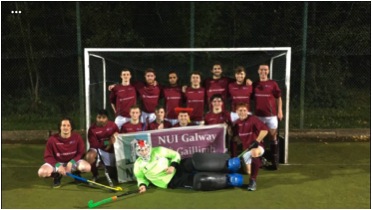 SIN caught up with NUI Galway Men’s Hockey Cub to see what they are up to, and how others can get involved.

“We want to bring hockey to the mainstage in Galway. The women’s team has quite a strong following, but up to this point a bonafide men’s hockey club has never existed in NUI Galway. We want to bring a group of lads together and create an environment where guys starting can find some of their best friends in college, and in life, through our club. Train together, play together, and most importantly have a bitta craic together,” says Henry Cooke, the club’s Public Relations Officer.

“When we first decided to get involved in University hockey, our main goal was the Intervarsities at the end of October. A group of us have been playing hockey since we were kids and would know quite a few people in hockey circles around the country. After successfully fielding a team and having a good weekend in Dublin, we just decided to crack on, and the small talk about hosting the Mixed Intervarsities started to grow legs.”

“Without a doubt, our biggest achievement as a club so far was when we hosted the Mixed Indoor and Outdoor Intervarsities in Galway. We did this alongside the Ladies’ team in our first year as an official club last year,” he says. “The event had 18 teams across two competitions. Our NUI Galway team finished 2nd in the inaugural indoor intervarsity competition and 5th in the outdoor competition.”

When asked how the club members got involved, Henry says; “When we founded the men’s club a year ago, we had no outdoor training spot, but we had also begun to run a recreational indoor hockey session for men and women. It was purely for fun and we just tried our best to get as many of our mates down to play, and slowly word spread. We also generated a good bit of interest through our social media.”

“We are the first men’s hockey club in NUIG and we are one of only two men’s hockey clubs in the entirety of Connacht. We do not lack ambition, and with a pretty small scale setup, we have achieved a huge amount in a very short time, and I think the Mixed Indoor and Outdoor Intervarsities is a testament to that.”

“You can find our club on the NUIG club’s website, or even better just turn up to training on Tuesdays from 17:30-19:00 at the Dangan Sports Ground’s hockey pitch! We can provide hockey sticks for any beginners and are always delighted to see new people. We also run a recreational mixed indoor hockey session on Thursdays from 12-1 in the Kingfisher. Of course, people can also get in contact with us through our Facebook or Instagram pages,” Henry adds.