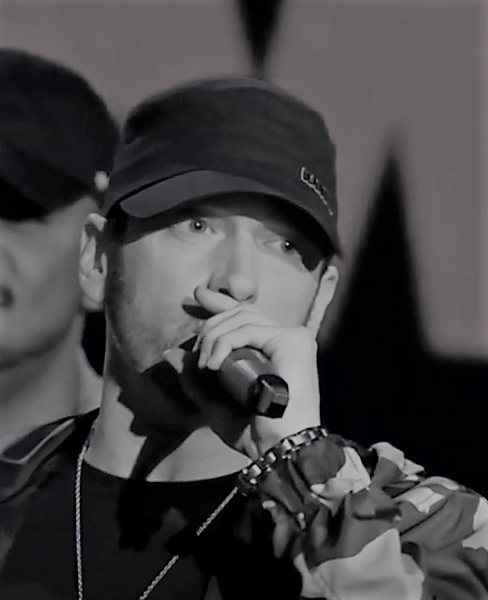 With the shock release of his new album, Kamikaze, Eminem sets out to try and reclaim his throne after the critical panning that his 2017 album Revival received, and to take aim at some of the biggest names in rap.

The opening track, ‘The Ringer’, sets the tone for the rest of the album, with Eminem dissing critics of his, such as Joe Budden and Charlamagne Tha God, while at the same time adopting a Gucci Gang-esque flow for a few bars and criticising mumble rappers. While all this out-of-the-blue name-dropping and straight-up mockery carries shock value when you first hear it, some of the issues that made Revival an unlistenable mess still appear.

While the beat itself is okay, the production quality is not what you would expect from a top-selling artist, with points where the audio clips and sounds poor. His trademark flow, rhyming and unfunny genital puns start to grate on you from the beginning.

The cheesy, boring relationship ballads that were the backbone of Revival are back and just as bad, with songs like ‘Normal, Nice Guy’ and ‘Good Guy’ being noticeable low points of the record with cringey, clichéd lyrics accompanied by run-of-the-mill instrumentals. Luckily, there are only three such cuts on this record.

One of the few high points on the album comes on the song ‘Lucky You’, with a stellar feature from Joyner Lucas coupled with a rare moment of humility and honesty from Eminem, where he admits he “took an L” on Revival. Yet, this moment comes with a caveat as it makes Eminem’s bashing of his critics seem a bit redundant if he flat-out admits they were right.

On ‘Fall’, Eminem comes out with some of his most controversial lines ever as he attacks several other artists, most notably Machine Gun Kelly, a beef that has spawned diss tracks from both artists, and quite surprisingly, Tyler, The Creator. Eminem tries to use Tyler’s sexuality of all things against him, after Tyler hinted that he was bi on his latest album Flower Boy.

This sudden and offensive Tyler diss is a shock, as Tyler has always credited Eminem as one of his biggest inspirations, and Eminem had mentioned Tyler in a positive light on previous records. Eminem later clarified why he came at Tyler as part of an interview series with Sway, saying Tyler had tweeted negatively about 2014’s Shady XV, and Eminem’s 2017 single ‘Walk on Water’.

In that interview, Eminem also expressed regret for what he said; “In my quest to hurt him, I (realized) that I was hurting a lot of other people by saying it.” Although some have questioned whether Tyler would take being called a “f****t” to heart. During his time as a member of Odd Future, Tyler himself was banned from performing in several countries due to his use of offensive language in his music.

On the closing track, ‘Venom’, Slim adopts one of the most complicated yet annoying flows I have ever heard, which is proof that despite the fact he still possesses the technical ability to rap like no one else, that doesn’t make up for the most important thing – the fact that it sounds awful.

Kamikaze is an improvement on Revival, but that’s not saying much. The majority of this album is much of the same boring and unimaginative Eminem that we’ve seen over the past few years, even with the amount of disses he drops and controversy caused as a result of them.