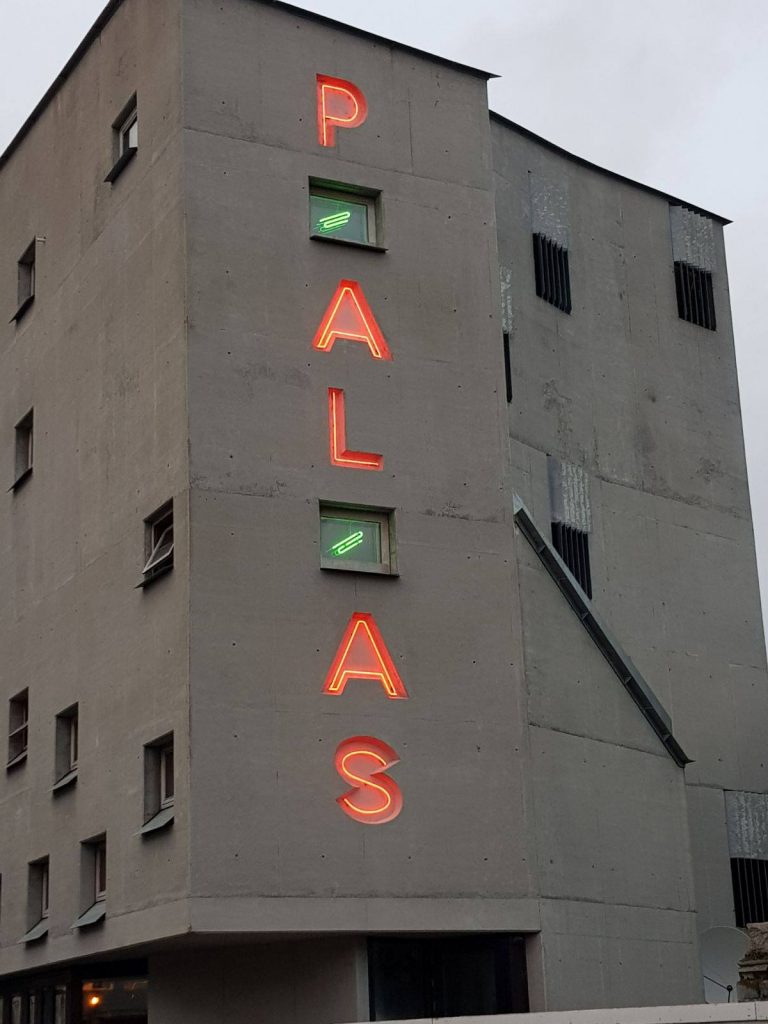 The long-awaited opening of Galway’s Pálás cinema finally took place last month, with the art house cinema opening its doors at the end of February. Mired in controversy for nearly 14 years, the building stood ominous over Spanish Arch with many wondering if anything would ever come of the much anticipated ‘cultural hub’.

Now finally screening various films to the people of Galway, the amazing thing about Pálás is how different it is to Galway’s other two cinemas. Spanning five floors the modern, open-plan building is as much an art work as it is purposeful. Various light fixtures adjourn the concrete-cast hallways that are lined with colorful glass windows.

The screening rooms are all decorated differently with a different theme and color scheme in each. With three screens, the cinema seats 321 people and the building also houses a bar and small restaurant.

General Manager Katie Walsh told the press at the launch that the hope behind the project is that it will bring a new type of experience to cinema goers. The cinema is the first self-scanning ticketed cinema in the country and the first cinema in Galway to have an in-house bar and restaurant.

“We have a big focus on food and drink here,” said Walsh. “We’re offering hearty Irish food in our restaurant and everything is locally sourced.”

The box office also acts as a coffee bar and opens early in the morning. You also don’t need to line up at a ticket desk because tickets are also sold at the bar and restaurant and online where you can choose your seats.

The cinema also differentiates itself with the eclectic mix of films that are on offer, such as a Vivienne Westwood documentary and numerous Wes Anderson selections that are now screening. Pálás is the new home of the Galway Film Society and Galway Film Fleadh and it plans to offer viewers both Irish and international films along with everything from recorded theatre to cult classics, foreign language movies, ballet screenings and documentaries.

Charlene Lydon, programmer for The Lighthouse cinema in Dublin and now Pálás, said that the cinema is especially excited about the “excellent line-up” of Irish films that they have in store.

She said that the cinema is mirroring its sister cinema The Lighthouse a lot right now but that they will be trying to get a better sense of what Galway cinema-goers want to see during these first few months.

The cinema opened with three big Oscar nominated films that were also showing in other cinemas – I, Tonya, Lady Bird and The Shape of Water – but has since started showing less common films as well, such as Sergio Leone’s A Fist Full of Dollars. The cinema has also been screening old classics, such as Grease for its 40th anniversary. They will also be screening work by the Galway Film Society from April.

“We’re really excited about what’s to come,” Lydon told the press gathered at the launch. “Watch this space.”

The cinemas development has been a well-documented saga in recent history. The project was the subject of many reviews and sparked a copious amount of criticism after years of funding failed to see the cinema finished.

Millions were poured into the project from various sources with the total cost before opening being somewhere in the region of €9 million.

Many have waited years for the art-house cinema so there has been great excitement and curiosity since the opening.

“But we’re really excited and proud to finally open our doors to the people of Galway.”

There is a discount for student tickets which are €8.50 and you can park in Hynes car park for €4 in the evenings.