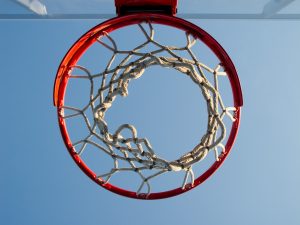 While the question of “what teams are contending for the NBA championship this year?” may have a relatively routine answer with the Golden State Warriors are seemingly unbeatable over a seven game series, the NBA playoffs still features both teams and players who can excite the masses by going farther then what was previously expected of them.

To begin with if one looks a look at the Western Conference standings, not too far down in that list is the Portland Trail Blazers. Last year, the Oregon men occupied the eighth seed and were bounced in the first round by the eventually champions Golden State. The Trail Blazers boast one of the best guard rotations in the entire NBA with Damien Lillard, CJ McCollum and Shabazz Napier all having great years.

The exploits of Lillard and CJ are well documented, and their abilities to stretch the floor and attack the rim despite being undersized stems from the stereotypical ‘chip on the shoulder’ that’s associated with NBA players whom have attended mid-major colleges, see Kenneth Faried (and then run away promptly before he dunks on you).

The play of U-Conn graduate and back-up point guard Shabazz Napier has been nothing short of meteoric in comparison to the rest of career. He seems to finally be blossoming into the player we thought he would become back in 2014 when he helped his Huskie alums bring home the NCAA championship.

Napier is putting up close to ten points in around 20 minutes but is also averaging a team high 1.2 steals per game which benefits the second unit’s up-tempo style. Add to this rookie Zach Collins’ ability to be a menace on the offensive glass and the ‘Blazers’ have one of the best benches in the NBA this season

If the season was to end when this article was written it would mean that the Trail Blazers would have to beat the San Antonio Spurs and should they beat Popovich’s men, they would have to face either the Golden State Warriors or the Minnesota Timberwolves.

On paper all of these look like potential five to seven game series, with the latter largely depending on how quickly Jimmy Butler can come back from his current torn meniscus. This is a further example of how close the Western Conference is this year.

In the Eastern Conference, there have been quite a few surprises, namely the Cleveland Cavaliers who have been disappointing in comparison to previous seasons following the trade of Kyrie Irving in the off season.

Although LeBron James will always be one of the highlights of any playoff season as long as he remains at his current level, it’s the Indiana Pacers who are the team to watch this coming playoff season. The side were predicted to be in the lottery of the NBA draft, but the meteoric rise in performance by off-guard Victor Oladipo has made the presumed one-sided trade that saw Paul George leave Indiana for Oklahoma City become one of the Cinderella stories of this season.

Oladipo has transitioned from a third option on the Thunder to an All-Star leader for the men in White and Yellow. Numerous factors have led to this fulfilment of potential by the Nigerian born star, Oladipo had played college ball in Indiana and has often stated it as his “home away from home”.

Arguably the most important factor of Oladipo’s rise though, is the style of play in Indiana in comparison to Billy Donovan’s men. Indiana live up to the ‘Pacer’ name aptly, they love to get out and run in transition, a far cry to the ‘hero-ball’ that was played by Russell Westbrook in OKC.

Thaddeus Young, Glenn Robinson and ‘Vic’ are all freakish athletes who are able to provide magical moments on the fastbreak. Opportunities in transition are hard to find in the Playoffs but if anyone can capitalize on them its Nate McMillan’s men.

The Eastern Conference is a lot closer typically then the West and should the Pacers end up facing the Cavs or Wizards, they will feel confident that their hard-nose defence and athleticism can see them make a potential run to the conference finals.

All in all, the playoffs can be difficult for the underdogs due to the series’ being played over a seven game period with the better side getting home court advantage, but yet so often this year we have already seen the underdog come through (Yes Loyola-Chicago, we are looking at you). No matter what expect drama, heartbreak and elite level basketball as always this playoffs.