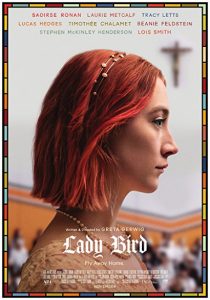 The intricacies of the mother and daughter relationship are explored expertly in Greta Gerwig’s directorial debut Lady Bird. Christine or Lady Bird, as she calls herself, longs to be different. She wants to be popular and cool, and her ‘squeezed’ middle class family can’t provide the funds for the lavish lifestyle she desires. She clashes with her mother Marion frequently.

The film touches on some poignant themes like class, race, gender, sexuality and mental health, but it doesn’t exhaust itself trying to explain them.

Anyone who has been a teenage girl will relate to Lady Bird. Her poster-bedecked room and scribbling of her boyfriends’ names on the wall of her bedroom are so inexplicable yet familiar. Not to mention her teenage narcissism.

Yet, the film is inherently sad. Marion and Lady Bird fail to have a face-to-face, cathartic reconciliation. They can’t explain themselves to each other, even when they try. “My mother was an abusive alcoholic” and “maybe this is the best version of myself” falls on deaf ears.

The setting of the film is exquisite, both in time and place. I loved the sleepy nature of Sacramento, and I didn’t realise one could be nostalgic over 2002. Gerwig gets everything right, from the shell necklaces to the ugly loose jeans.

The cinematography is beautiful too, one scene in particular focuses on the casinos and bright lights of Sacramento, accompanied by a hazy score. Lady Bird is her senior year of a Catholic all-girls school, and the uniforms and nuns will be a familiar sight for many Irish women.

What was amazing about this film is that it wasn’t a comedy, but the quips were hilarious. Lady Bird’s weirdness and desperate need to impress bad-boy Kyle leads her to accidentally say “I’ll kill your f***ing family,” and he replies dryly “Well, my Dad is dying of cancer so it seems like Gods already doing that.” Dark jokes stemming from teenage awkwardness were the highlight of the film.

Laurie Metcalf and Saoirse Ronan were both entirely believable. Ronan even had acne scars which weren’t airbrushed away. Metcalf played the fraught, emotionally drained mother perfectly. I felt distraught when she realises she has let her stubbornness get the better of her, and frantically drives back to the airport only to realises Lady Bird has already gotten on her plane to college.

The ending of the film was abrupt – but we won’t spoil it.