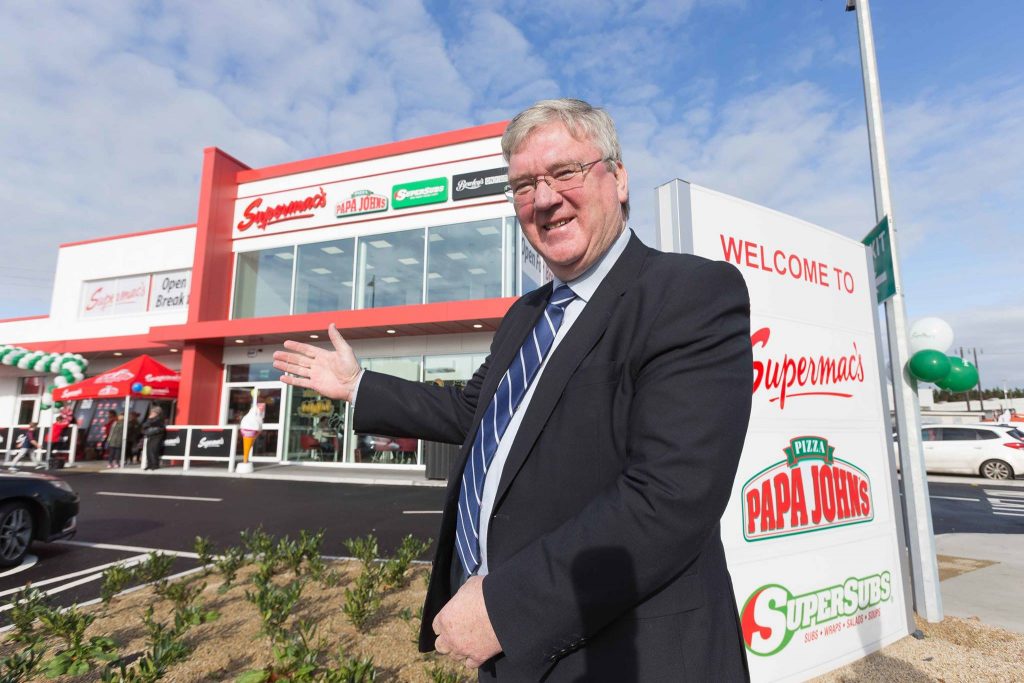 On 6 March NUI Galway’s BizSoc and the Career Development Centre held an event entitled ‘An Evening with Pat McDonagh’ with an interview section followed by a Q&A with the man himself and the 200 students in attendance.

Organisers took the time at the beginning of the evening to explain that it was the founder of Supermacs who offered to make an appearance in NUI Galway. Immediately setting a light-hearted tone for the evening, McDonagh looked around the hall, stating that some of the students “look familiar alright.”

Founded in Ballinasloe in 1978, Supermacs was intended to be a pool hall, but this venture was turned down on the grounds of planning permission.

“You always have to use your imagination,” McDonagh explained to the audience. There were three options available to him when he bought the site in Ballinasloe; a furniture shop, a nightclub or a fast food restaurant. In fact, he bought the premises before he had secured a loan from the bank.

Supermacs now has 108 restaurants across the country and employs 2,500 people of 21 nationalities. Starting out as a businessman turning away from the teaching profession, McDonagh admitted that he “didn’t know how to boil a kettle.” He says he worked 364 of 365 days a year, because there “simply is no shortcut to success.”

In the Q&A session, more subjects were touched upon which truly showed the scope of Supermacs’ future. When asked about taking the brand to an international stage, McDonagh raised the issues that the business is facing in relation to other international brands blocking their progress. While he did not mention the company by name, he mentioned the use of the prefix ‘Mc’ or ‘Mac’ as causing issues for international markets.

McDonagh made a submission to the European Unions Intellectual Property Office in the spring of 2017. McDonald’s has registered several trademarks such as ‘McKids’, ‘McHome’, ‘McWallet’, ‘McNoodle’, and more applicable to Ireland, ‘McMór.’ McDonagh believes the US giant has done this to thwart smaller family businesses.

The United Kingdom is where he is looking to next to expand Supermacs’, and yet Brexit is not something that is affecting his judgement. “I’m one of the few people who does not think that Brexit will happen,” he said, “or if it does, it will be a watered-down version of what people are expecting.”

Closer to home, Supermacs has had to deal with false compensation claims before the courts. At one point in time, McDonagh was faced with 125 live cases claiming injury on Supermacs premises, several of which were fabricated. When asked by a member of the audience if he finds it hard to trust people as a result, he gave a definitive response; “No I still trust people. There’s always going to be that four or five percent that chance their arm, but the majority of people are good-natured.”

McDonald’s currently have kiosks which eliminate the need for staff, and when asked about this McDonagh simply said “that’s the way it’s going to be” in years to come. He explained how he goes abroad on a regular basis just to observe the changes in the hospitality industry on a worldwide scale.

Obesity is another topic that was brought up, but he defended the company saying that there are options available to customers for healthier eating, the grilled chicken sandwich being cited as an example; “It’s the sauces that add calories to the burgers, and customers can request not to have sauce.” Supersubs which was established in 2014 and is now located in 16 stores nationwide including Eyre Square and Newcastle Road, give customers the option of salads, wraps and soups, which McDonagh believes counteracts the idea of fast food being unhealthy.

The evening finished with a round of applause for the man who has provided a place for countless Galway students to gather after a night out. McDonagh provided pizza for the audience, proving that he is one of Ireland’s well-deserved success stories.