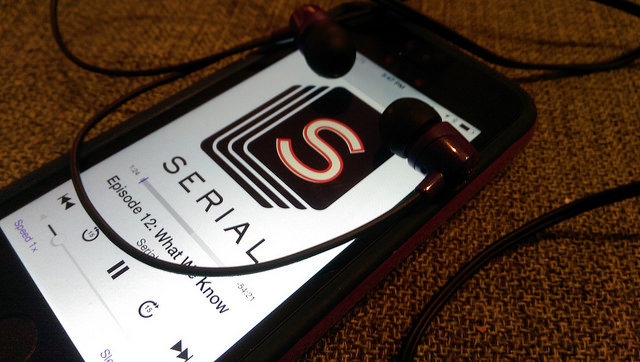 I first started listening to podcasts during my Leaving Cert, when my English teacher told my class to listen to Serial to understand the narrative form and how it can be used in different ways.

This podcast narrated by Sarah Koenig immediately hooks in the listener. Something about the way the story was told just brought me back, week after week. I looked at the top charts on iTunes and downloaded the most popular ones. Now, I listen to podcasts more than I listen to music.

There is something for everyone in the podcasting world, which is why they have taken over from traditional radio for some.

There are fictional podcasts like Welcome to Nightvale, detailing a mysterious desert town in America where every conspiracy theory seems to be true. There are feminist podcasts which deal with women’s issues and intersectionality in fun, colourful ways, like Stuff Mom Never Told You and Unladylike.

The reigning Irish podcaster at the moment has to be Blindboy Boatclub of the Rubberbandits. His Limerick lilt and quick quips have listeners in stitches, but he also tells interesting historical stories, and touches on poignant issues like mental health.

But what makes podcasts different from traditional radio? And are they taking over? I would argue that the two exist in the same vein but are not necessarily detracting from one other.

The form of podcasts is quite free flowing and not strictly confined to segments like radio is. This results in the “podcast hug”, as Blindboy puts it. There are also a lot more story form or fictional podcasts out there compared to what is offered by the main radio stations.

Additionally with podcasts, serious crime, issues surrounding race, sexism, reproductive rights and mental health are freely discussed, and they don’t have to adhere to strict Broadcasting Authority of Ireland laws. There is simply more diversity in the podcast world.

Podcasts aren’t perfect though. A lot of them are made initially by amateurs, who are creating content as a hobby. It is very difficult to make money from podcasts, as most would only have three advertisements in each show, and it is hard to get a sponsor starting out. This means it is difficult for start-up podcasts to buy good equipment and improve their sound quality.

There is also another problem with podcasts which occurs when hosts try to emulate radio too much.

This is evident in This American Life, which is a public radio show and a podcast. This takes quite a traditional segment form, and the stories are great. However, a lot of the contributors speak with this sort of false sincerity which Americans seem to crave from TV and radio presenters. This does not translate well to international listeners, so this tone of voice could drive people back into the arms of national radio.

While podcasts may have started off emulating radio, I think they have grown into something different. Their style and themes are different to that of traditional radio, leading to separate audiences. I don’t think traditional radio will lose listeners because of podcasts – but they need to seriously rethink their style and content in order to draw in new listeners. Maybe they could take a leaf out of a podcaster’s book?