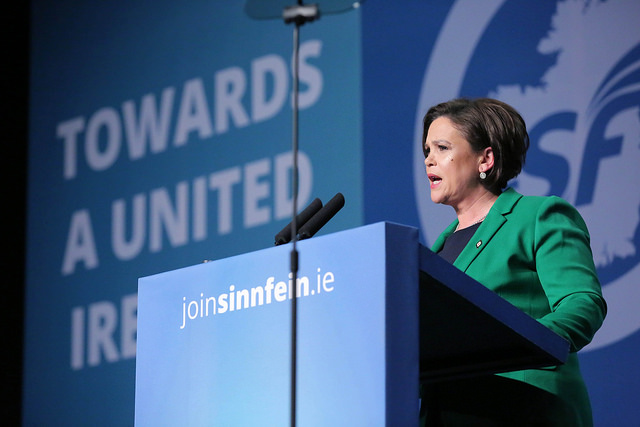 “Tír gan teanga, tír gan anam”. A proverb meaning “a country without a language is a country without a soul”. A proverb most of us have grown up learning in school, but one considered to be true for our country. Ireland is the land of culture. We are our language, we should show our grá for Gaeilge and above all not turn it into a weapon. Looking at you, Mary Lou.

The new Sinn Féin president Mary Lou McDonald was given the title unopposed and told the Irish people “up the Republic, up the rebels and tiocfaidh ár lá” when making her acceptance speech. The speech received a standing ovation of 2000 people in the RDS in Dublin.

The phrase that’s got everyone talking was apparently unscripted and was not seen to be on the prompter. This begs the question: did McDonald intend to use the IRA slogan and was advised not to, or was she caught up in the moment? Either way, it doesn’t paint a reassuring picture for the kind of Sinn Féin leadership McDonald intends to introduce as she aims to reunite Ireland.

Following much controversy, the day came when McDonald was forced to address the “tiocfaidh ár lá” exclamation on The Late Late Show last month. Host Ryan Tubridy questioned the leader on what exactly she meant by it. Dodging the question as best as she could, McDonald told the Irish viewers she was focusing on a “new Ireland” and her new visions for the future of Ireland.

“And I know for some people that sounds like a harking to the past, for me it absolutely is not,” she said.

A leader so focused on the future she quotes the past? Backwards thinking at its best. How can an Irish woman completely aware of the past horrors and struggles our nation has faced still use a send off so tied to the hardship? “Tiocfaidh ár lá” is a slogan associated with so much pain, distress and an Ireland no one wants to return to. Using such a phrase in order to describe a “new Ireland” is alarming and disturbing.

Before her speech at the Ard Fheis I believed Mary Lou McDonald could make a change to our government. I always considered her to add a youthful, open-minded view to Irish politics. My opinions have changed. I do not think McDonald should introduce these kind of politics to this “new Ireland” she has planned. Frankly, it won’t bring anything new to the table.

We need new voices with new ideas on how to actually work towards a better Ireland. We need someone that values our language and would never try to turn it into a weapon. Gaeilge is the emerald gem our country proudly wears keeping our culture alive.

“Tír gan teanga, tír gan anam”. Our political leaders should believe in this proverb, ensuring the enduring life of the Irish language, never using it as ammunition.