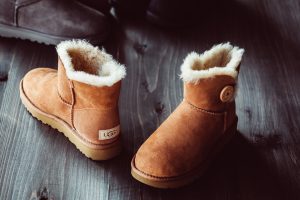 UGG boots are back with a bang, or a slouch rather. The infamous snug boot from our childhood has once again made its way back into the fashion world. I have to confess, in my ignorant youth I donned a pair of black (fake) UGGs. I paid around €12 for them. I now realise this is far too much money for a glorified slipper.

It’s no secret that UGG boots are bad for your feet. UGGs offers no arch support, according to foot blog healingfeet.com, which is ran by the New York based Centre for Podiatric Care and Sports Medicine.

“UGGs are a vague shape that allows your feet to flop around inside of them. That means that somewhat like flip flops, your feet, especially your toes, have to clench and grab with each step you take, otherwise your feet would just slide… there’s no stability or support, especially for your arches.” Why would I want to pay €150 for the genuine article to destroy my feet?

UGG boots are an affront to the eyes. I cannot believe people will pay good money for an ugly slipper, which comes in vague, muddy shades. They might have been made popular in the early noughties by Paris Hilton and Mary-Kate and Ashley Olsen, but lest we forget: crimped hair and sticky pink lip gloss was also considered cool back then. Some things a better left in the past. Not to mention that UGGs are the furthest thing from waterproof, not very practical in the Galway climate.

For me, wearing UGG boots is the same ballpark as wearing pyjamas outside. That being said, Vogue recently did an article with their editorial team on whether UGGs were acceptable or not. To my surprise, many of the staff still wore UGGs, albeit on chill days where they weren’t going out in public much.

At the end of the day, it’s a personal choice whether to wear UGGs. Just don’t come crying to me when that Galway wind and rain leaves you with soggy, crumpled UGGs and a pair of soppy socks.