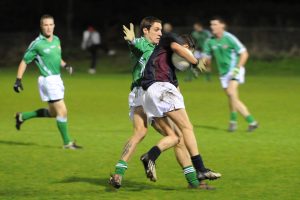 “You wouldn’t do it to a greyhound”

After Kerry footballer David Clifford limped off the pitch in Castlebar with a hamstring injury last week, debates have been sparked over whether or not student GAA players with county profiles are exerting themselves by trying to keep up with January’s hectic GAA calendar.

Over the past week sporting commentators have rebuked the scheduling conflicts for young athletes and inter-county managers are being criticized for pushing their players too hard for the time of year.

Ultimately two worlds are colliding at the moment for inter-county players who are also playing at third level, with the Sigerson and Fitzgibbon cup finals looming as inter-county teams are trying to consolidate their position early in the year with pre-season matches.

Clifford, who is the most highly regarded GAA prodigy since Joe Canning, culminated a hectic week in injury after playing three games in just seven days. The 19-year-old IT Tralee student started his week in Donegal making his senior competitive debut with his county and travelled the five hour journey from Tralee to Belfast the next day with his college. By Saturday, the young athlete was on another bus to play Mayo – where he injured himself in his 105th minute of play in just three days.

Kerry manager Eamonn Fitzmaurice has been criticized for not letting the young player rest after such a hectic week but defended the decision to play Clifford.

“There were open lines of communication and we both knew what was going on. There was no problem from my point of view or from Eamonn Fitzgerald [IT Tralee GAA officer]’s point of view,” he said.

After Clifford missed IT Tralee’s quarter-final against DIT, ITT football manager Liam Brosnan highlighted the issue stating that a line needed to be drawn. Dublin football manager Jim Gavin also spoke out against the scheduling conflicts, explaining that “it’s the cumulative effect of the load, not just the next day but the impact it has over time”.

Clifford certainly isn’t alone in his busy timetable. Sean O’Shea and Jason Foley both played multiple matches the same week for Kerry and UCC and Jack Kennedy the same for Tipperary and UCC. Limerick’s Gearoid Hegarty played five games in 12 days between playing for the Sigerson and Fitzgibbon cup games, on top of inter-county pre-season.

“You wouldn’t do it to a greyhound,” Jim Gavin added.

Joe Bradley spoke on the GAA podcast ‘The Throw In’ about Clifford’s injury.

“What Eamonn Fitzmaurice should be doing is saying ‘look he got his debut out of the way…but this kid has got a heavy schedule. We are going to let you play your university football now and then there is ample time to come back”.

Tomás Ó Sé also weighed in on the podcast: “These young guys are playing more football in January than they’ll play for the rest of the year, it’s ridiculous.”

So, should inter-county managers be paying more respect and attention to the pressure their young players are facing? The problem lies in that these players want to play for both teams. Their passion is driving their desire to constantly play. But then you have those who are being invested in by their universities with scholarships, thus they are expected to play for their university team. It is a tough balancing act but it is down to the managers to look at the situation and prioritize player welfare.

Fitzmaurice has defended his decisions this week.

“We have this debate every year with regard to the scheduling of the National League and the Sigerson Cup on at the same time,” he said.

“It places big demands on young players. It was one of the reasons we did not play in the McGrath Cup this year.”

Fitzmaurice added that Kerry were closely tracking the workload on their college players in recent weeks and are monitoring the players closely.

There is no easy solution to the problem and it has been an issue for a very long time. If university competitions were moved before Christmas then it would interfere with exam time and if it was moved any later in the college year then it would be in direct interference with inter-county play. After the recent events some are voting to scrap pre-season games altogether and to dedicate the early year to the third level competitions, which comes with even more issues.

Maurice Brosnan of Balls.ie wrote about the dilemma recently and summarized the outcome that will snowball if a viable solution isn’t presented for this problem stating that  “eventually, the cycle will beat the affection out of them. It’ll become a chore, and the game lesser for it”.