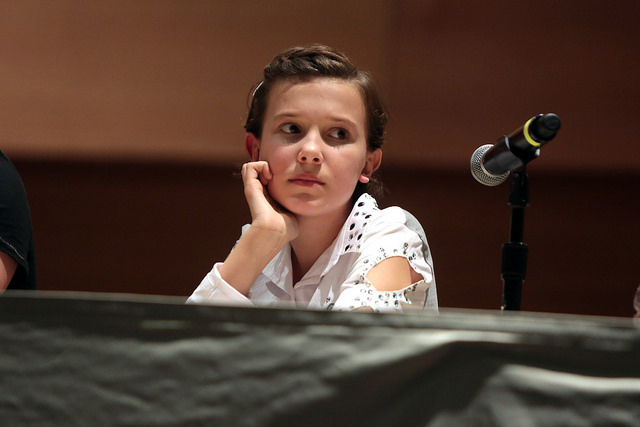 Celebrity culture is frequently depressing, but one of its most grim aspects is the adultization of child stars. From Tatum O’Neal to Lindsay Lohan, these children are treated like mini adults, often with dire consequences. Which is how we’ve ended up with gossip websites sharing all the juicy details of Stranger Things star Millie Bobby Brown’s new relationship. In case you’ve forgotten, she’s 13. It’s not like we needed any more proof that we’re in the Upside Down, but there you go.

The problem isn’t really the reporting of the story itself. This writer would like you to know that she’s a hypocrite who clicks on Millie Bobby Brown news occasionally. Let’s face it, Millie charms everyone in her path and people are interested in her. She doesn’t have to be off-limits if your publication uses the right tone and sticks to information she shares herself. That’s what she did with this story, via an Instagram photo, so she obviously doesn’t mind the attention.

However, this is not being reported as kids doing cute kid things – media outlets aimed at adults like Us Weekly and Metro are picking up the story and using the same tone they use for adult celebrity couples. That’s weird, right? It’s only a matter of time before the paparazzi are following them around and they get their own portmanteau couple name.

Meanwhile, her fanbase is disgruntled because her “man”, 15-year-old Jacob Sartorious, seems a bit gormless. A singer who rose to fame (if you can call it that) on something called Musical.ly, he Tweets deep thoughts like “i think about the future a lot better w you in it”. We’re being too harsh on the poor lad, aren’t we? Anyway, it’s understandable when those fans are her age, but if you’re an adult getting hopped up about it, it’s time to get a hobby.

The cult of Millie Bobby Brown is an odd one. She’s held up as being wise for her age and the next Meryl Streep in some circles, but she’s also criticised for wearing vampy make-up or supposedly age-inappropriate outfits. There was plenty of pearl-clutching when she wore a loose black leather dress to the Stranger Things season two premiere. Leather always equals S&M, right?

Her detractors try to disguise their whispers as concern. However, they’re still scrutinising her body and her sexuality, and getting excited about someone possibly unravelling under the pressures of fame. Former child star Mara Wilson puts it succinctly in an Elle piece about our uncomfortable obsession with Brown: “Young girls at risk, young girls objectified: It’s all titillation to them. These adults fetishize innocence, and the loss of innocence even more. They know what they’re selling.”

There are legitimate reasons to worry about Millie. She’s the breadwinner for her family – they upped sticks from England to Los Angeles to fulfil her dream of acting. There are signs she’s overworked – as well as Stranger Things, photoshoots, award shows, talk shows and music videos, she’s a big name on the convention circuit. She had to pull out of one last year because she was exhausted. And as mentioned, she has a lot of entitled fans. But you know what? We don’t know Millie or her family, and so we have no idea how stable her life is. There’s no telling how she’ll turn out, but the least we can do is to stop putting her life under a microscope.

Give the girl some breathing room. The only inappropriate thing about her private life is the grown adults acting like we need to know about it. She’s not yet old enough to be gossip fodder outside of Just Jared Jr. For now, let’s celebrate her skills as an actor and let her grow up in peace.