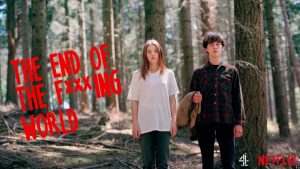 The new eight-part Netfix/Channel 4 series The End of the F***ing World follows James, a 17-year-old who believes he is a psychopath, and Alyssa, a 17-year-old rebellious schoolmate, who go on a road trip/ crime spree together – and it is f***ing incredible.

The End of the F***ing World is more in the vein of a quirky indie movie than a television serial and at eight twenty-minute episodes it can very much be watched like one. On their journey, James and Alissa meet the scum of humanity and they, for the most part, are not much better: Alissa is a rebel without a cause and is unbelievably rude while James murders small animals. Though despite this (and I hope I don’t sound like a psychopath when I say this), the show is uproariously funny.

The show cuts between the dialogue of the main characters and their internal monologue and shows the tragic circumstances which shaped them into who they are. In watching the series, one can see the influence of people like Wes Anderson in the strange humour and Edgar Wright in the incongruence between small town English life and American style genre movie tropes. The main person who impacted the show the most is Quentin Tarantino particularly the movies based on his scripts Natural Born Killers and True Romance – one can see the mixture of pitch black comedy as well as troubling content all over The End of the F***ing World.

The cast is unbelievable. Alex Lawther, who is best known for the Black Mirror episode “Shut Up and Dance” turns in a hilarious performance as the detached, dead-eyed James complete with Dexter-like voiceover while Jessica Barden, from among other things Coronation Street and The Lobster, does a great job at making Alissa both very unpleasant as well as very endearing and vulnerable. The romance between the two was something that I didn’t think I would care for but actually might be one of its most important elements. The actors who play the main duo’s parents also turn in wonderful jobs. Whelan and Mosaku also do an interesting variation on the good cop/bad cop pairing as well but they are still archetypal.

Conclusion: A winning central pairing and off-beat black humour elevate the show way beyond the “Bonnie and Clyde in England” premise.