In a month or so, we will surely have developed an aversion to awards shows and red carpets to last, well, ten months or so. Contrary to what we might think, the greatest red carpet this season was a grey one, walked by hundreds of thousands of women across America and beyond on 21 January. The Women’s March was not only the ultimate stand against misogyny and inequality – it was also a hub of clever slogan tees, genius signs and some very appropriate hats. For the weather, I mean. Just the weather. 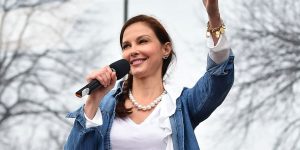 Reminiscent of one of Trump’s anti-Hilary gems in which he branded her a “nasty woman”, the phrase came back to bite him and was emblazoned across countless shirts in the wake of his inauguration. This nicely complimented actress Ashley Judd’s speech in which she roared “I am a nasty woman” to a host of cheers, fist pumps and battle cries from me. I mean, eh, the protesters. Other popular slogans including “Feminism is the radical notion that women are people”, “A woman’s place is in the house and the senate” and “Don’t boo, march”, joined a sea of diagrams of the woman’s reproductive system straight from the biology books. Unlikely that they’ll get much wear out of those shirts again, but then again nothing’s certain these days.

Adding to the sea of colour were placards of every shape and size. An army of Princess Leias paid tribute to the late Carrie Fisher with their space buns and cardboard shields wielding phrases such as “The woman’s place is in the resistance” and “Don’t Leia hand on my healthcare”. Puns were rampant, along with comparisons of Mr President with various orange food stuffs – my personal favourites being “Not my cheeto”, and images of a wig wearing peach with the caption “Impeach”. One sign trumped the rest, and was a subtle nod to every child’s favourite woman, the great Mary Poppins – it read: “Super callous fragile racist sexist Nazi POTUS”. Oh word play, how underrated you are.

To top off this season’s activist look, men and women alike kept heads dry with vibrant pink woolly hats with two peculiar points like antenna at the top. But antennas they were not, in fact what many did not realise was that the hats resembled a womb, making the antennas none other than ovaries. If that’s not high fashion I don’t know what is. The creatively named ‘pussyhat’, referring to that Trump recording, was an initiative created by the Pussyhat Project, organisers of which sought to knit one million hats ahead of the march. “Hold on to your hats, wear them loudly and proudly”, the site now states.

Hold on to it all, ladies. The show’s not over.