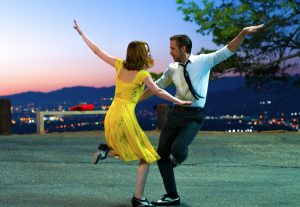 Damien Chazelle’s colourful and hopeful musical starring Ryan Gosling and Emma Stone swept up every award it was nominated for at the Golden Globes and earned a rake of nominations at the upcoming BAFTAs. It’s expected to win big at the Oscars as well, particularly in the musical and technical categories. It follows an aspiring actress (Stone) and a struggling jazz musician (Gosling) as they navigate falling in love and following your dreams in modern day Los Angeles. For those of you who love musical theatre, miss old school movies like Singin’ in the Rain or just enjoy movies with a lot of heart, this is the ideal film to see this January. Chazelle previously directed critical favourite Whiplash, so you can rest assured that he knows what he’s doing when it comes to portraying the desperation, hope and talent behind those dreaming of a career in the spotlight.

Manchester by the Sea – Out now 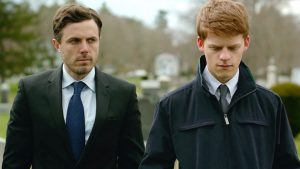 Kenneth Lonergan’s tragic unravelling of the past of a Boston loner, who is unexpectedly forced to become the guardian of his sixteen year old nephew, was one of the breakout indie hits of the year in the U.S. Produced by Matt Damon and John Krasinski, it stars Casey Affleck who’s haunting performance has earned him a Golden Globe for Best Actor – Drama and will inevitably lead to an Oscar nomination. If you’re looking for a solid, gritty and moving dramatic piece, this is a definite one to see.

Fans of the original Trainspotting will undoubtedly be excited to see the highly anticipated sequel to the much loved cult classic. Taking place 20 years after the first movie and starring the original cast, it follows Mark Renton (Ewan McGregor) as he goes back to Scotland to make amends with his old friends. Danny Boyle is back to direct the sequel and fans will be excited to see if it lives up to the dark humour and raw irreverence of the first film.

Starring Ireland’s own Ruth Negga, this films tackles the issue of inter-racial love and marriage in a deeply divided 1950s America. In Virginia in 1958, marriage between inter-racial couples was illegal and this film explores the emotional and very real consequences of these laws on two normal people. In a present day world where racism is still a deeply entrenched problem in many Western societies, it serves as a sobering reminder that we have not advanced as far as we think we have in creating an equal society. 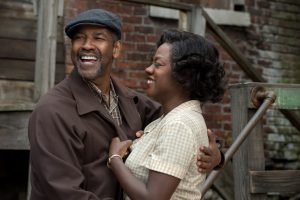 Directed by Denzel Washington and starring both him and Viola Davis, who recently won a Golden Globe for Best Supporting Actress for her role, this drama follows a working class father in 1950s Pittsburgh who tries to raise his family while dealing with the reality of never living his dreams. The bitterness and harshness of jealousy, infidelity and the pressures of masculinity are explored through gripping performances in this widely acclaimed drama.

If you’re looking for something light – hearted, fun and genuinely comedic, this is a movie that can’t be missed. The hotly anticipated spin off to 2014’s breakout hit The Lego Movie is bound to appeal to young and old audiences alike. Voiced by comedy greats like Will Arnett (Arrested Development), Zach Galifianakis (The Hangover) and Michael Cera (Superbad), it promises a brilliant soundtrack, unique animation and a new take on the trope of the superhero movie that’s bound to leave you delighted.

This biographical film starring Taraji P. Henson (Empire) tells the story of Katherine Johnson, an African American NASA mathematician who played a critical role in determining flight trajectories for the Apollo 11 moon landing among other projects. Katherine Gardner herself is still alive and the movie is an interesting look into a relatively unknown figure who played such a pivotal role the space race.

In what’s being called the most beautiful movie of the last year, Moonlight follows a young African American man across three chapters of his life as he deals with growing up and the exploration of his sexuality through moments of joy, pain and love. It has been released to universal acclaim and currently has a score of 99% on Metacritic, becoming the fourth highest rated movie on the site. It picked up Best Picture – Drama at the Golden Globes and is expected to win big at the Oscars next month. If you’re looking for excellent cinematography, beautiful storytelling or to fall in love with the capabilities of movies again, this is a must see picture.