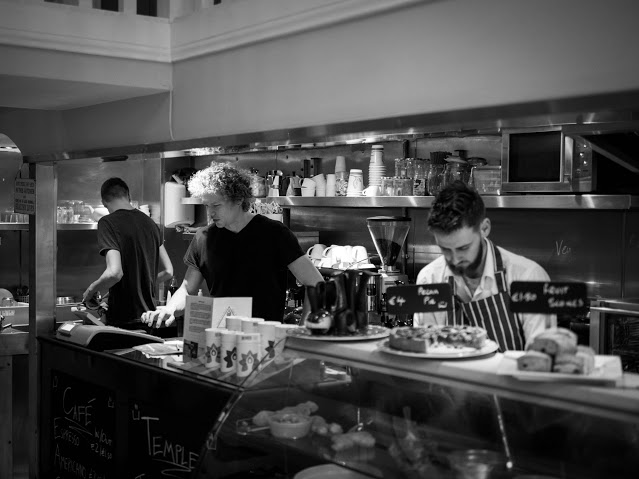 An NUI Galway graduate has recently opened a new social enterprise café on Augustine Street in Galway. Sitting in the bright, airy Temple Café, I spoke with Sebastian Taylor about how the business operates.

“How it works is we run as a normal business and the profits that we generate in the year go towards local charities,” he explained.

“So at the moment we have Console and SERVE working with us. Console is a local suicide awareness charity and SERVE is an overseas volunteering charity.”

The café is furnished with palettes or old furniture converted into tables and chairs, everything painted by Sebastian and his team. There is a calm, relaxing atmosphere in the café, helped along by the soothing singing of Norah Jones in the background and the smell of fresh coffee wafting through the premises.

Sebastian’s idea to start the social enterprise café was inspired by a number of things. He volunteered with SERVE in 2013, going to the Philippines with them, which he said opened his eyes to a whole new world.

“I volunteered with them in 2013. That was a great experience so that’s where I really started wanting to do more charity work,” he said.

“There’s a lot of poverty out there and, as Irish people we sometimes feel we are unlucky but we are so much better off than other people. So I think it’s very important for young people, especially young people in university to actually go and volunteer overseas. And I like with SERVE that all the money that is made from the project goes towards the project, it’s not all caught up in administration costs and all that kind of stuff.”

A café in Edinburgh, the Social Bite, also inspired his work today: “After I finished my degree in NUI Galway I went to do a masters in Amsterdam and was there for two years and then after that I went to work as a recruitment consultant in Edinburgh – so for the last year I lived in Edinburgh and while working out there I was across from a coffee shop called Social Bite,” he continued.

“They’re a social enterprise as well and they now have nine coffee shops across Scotland and they do a similar thing to what we’re doing but they work with homeless charities. One in four people who works for them is formerly homeless as well. So that’s where I first kind of heard of the idea.”

He said he also had heard a little about the concept of social enterprises from learning about Mohammed Yunus, the man who came up with the idea of social business and who won the Nobel Peace Prize in 2007 for it.

“When I started talking to the owners of the Social Bite, I started reading his book and the more I read the book the more it made sense,” he said.

Sebastian began working on his plans last July, putting menus in place and by November his father, his partner in the business, had found an ideal location in Galway for him to set up shop.

“It totally made sense to come back to Galway and start it here. So far the response has been great. People are really interested in the whole idea of it. That’s kind of one of the main ideas of it, if we could even just inspire one other person to start up a social business, that kind of knock on effect would be great. We’ve had a lot of interest in it so far; we’ve only been opened three weeks so, so far so good and we’ve got a busy lunch trade.”

Other charities have shown interest in the café too and Sebastian is hoping the café will work with different charities throughout the year and organise events to raise funds and awareness as much as possible.

Sebastian explained the how important the link with charity is for him and how raising awareness around suicide is one of his missions with the café: “I’ve lost a few friends through suicide and members of my family,” he said.

“So you know, it’s affected a lot of people. Recently when they were having the Prime Time debate with the leaders and they were talking about suicide, they were saying if you’re under fifty, the most likely cause of death you have is suicide in Ireland,” he said.

And the name Temple Café?

“More so than anything, it is about treating your body as a temple,” explained Sebastian.

“So when I was in Edinburgh I left my position as recruitment consultant and I started working with Edinburgh Leisure and that’s when I started really learning about nutrition and sports development and everything like that and I started eating really healthily,” he said.

“And one of the gym instructors there always was like, ‘Your body’s a temple, your body’s a temple,’ so it kind of just stuck with me I suppose. And I think it’s important, for Irish people especially, we need to start looking at how we eat and how nutrition affects our body and not just that but our own mental health. We can eat to be healthier and live healthier lives – so that’s where the whole your body is a temple thing comes in.”

The café sources a lot of local produce with an emphasis on health options: “We do a lot of vegan and vegetarian options,” said Sebastian.

“So we are trying to be slightly different in the way we do foods … We do pancakes but they’re all kind of protein-orientated and we do beans on toast but we do our own homemade beans on toast, a no sugar option, whereas in a normal can of beans you have ten spoons of sugar!”

The café also does its own ‘Roughies’ – breakfast in a smoothie form – and student lunch deals, with soup and ‘proper’ sandwiches.

“We are trying to have that positive impact. When you’re coming in here you’re supporting charity and you’re being good to your body as well.”

Temple Café can be found on Augustine Street.