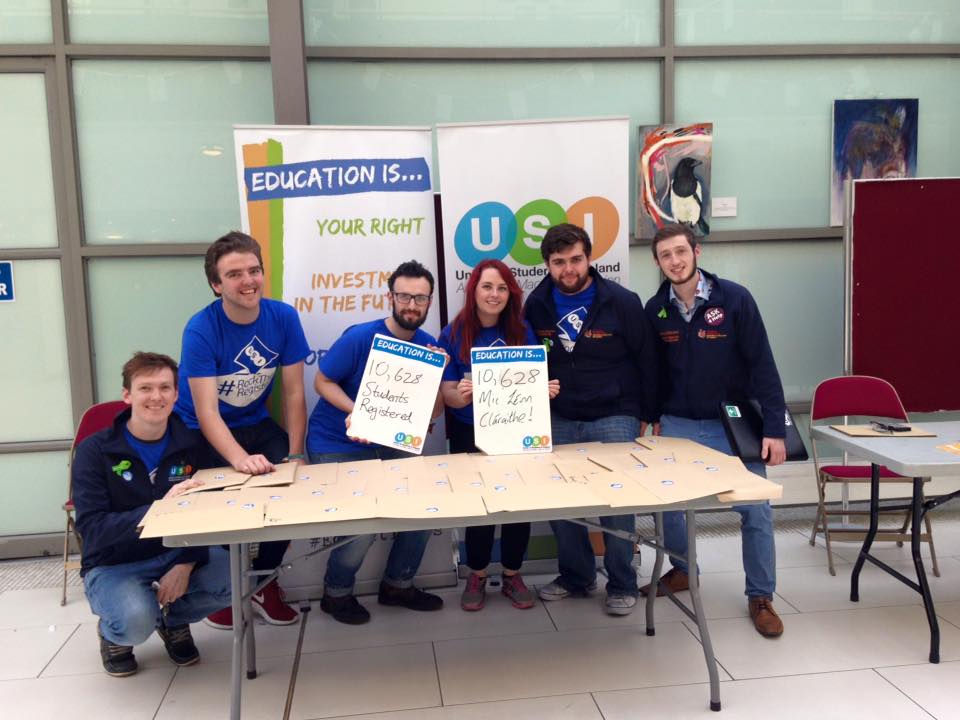 The Union of Students in Ireland (USI) have registered 10,628 student voters in anticipation for Budget 2016. The national representative for 24 member campuses beat their target of 10,000 registrations from between 6 and 8 October.

With over a half a billion euro in third level funding cuts made between 2005 and 2014, the USI’s campaign #EducationIs has been assisting students in making an informed vote in the upcoming General Election.

(USI) are calling on students to help protect college funding, grants and accommodation by registering to vote. The campaign has attracted mass attention, with The National Day of Voter Registration on 6 October seeing a dramatic 6,533 sign ups and their hashtag #RockTheRegister trending Twitter.

The movement follows up from the USI’s Pre Budget Submission, which was launched on 22 September. The submission calls for the Government’s Budget 2016 to reverse successive cuts to student family income thresholds, reintroduce postgraduate grants and address a shortfall in Student Assistance Funding (SAF).  It also states that only a third of students are currently availing of a grant despite the cost of living for students averaging 11,000 euro per year.

“The new students we are registering to vote will be voting for politicians who have their educational interests in mind. Government investment in third level education dropped from over €1.6bn in 2005 to €939m in 2014. We are calling on the Government to increase funding and accommodation for students, and reduce the registration fee of €3,000.”

NUI Galway SU President Phelim Kelly met with Galway East and West TD and Senator representatives at the launch to discuss key budget areas affecting students, as he discussed in his article in issue two of Sin.

He called for issues in applying for a grant such as estrangement, adjacency rates, family income thresholds and postgraduate support to be discussed in the Dáil. Mr Kelly also asked representatives to consider depleted student supports, accommodation concerns and extortionate student contribution fees.

“Social justice and equality are on the agenda for the Students’ Union this year. Last year we #MadeGráTheLaw by our efforts to register as many NUIG students as possible and we will be calling on you again for the general elections,” he explained.

“We have, for the first time in history, political capital and we have to build on this, especially when so many of you voted last May.”

Speaking to Sin after a successful day of registering NUI Galway students to vote, My Kelly said; “I’m delighted. It just goes to show that students are more politically-engaged this year. When I think about last year when we were registering students to vote in the Marriage Equality referendum, we registered 28,000, but that was over the course of the year. We have the 10,628 on top of that now, so they’re still registering in their thousands.”

The USI is particularly addressing areas of student grants and funding that were significantly depleted or cut entirely in previous Budgets. The Back to Education Allowance Bursary of €500 and Financial Aid funding which has decreased significantly in recent years, are both hoped to be reinstated. They are also requesting a student housing strategy for 2020 and an increase to currently drained Financial Aid Funding, as well as a raise in Social Welfare payments for those under 26.

As the national representative for 354,000 third level students in North and South Ireland, the USI has a history of strength in registering voters. The student unions body registered 27,633 new voters ahead of the marriage equality referendum last May by driving their campaign #MakeGráTheLaw.

Féidhlim Seoige, Vice President of the Border Midlands and Western Area of the Union of Students in Ireland commended last summer’s achievement.

“Politicians, and the candidates in the next General Election are beginning to take notice of this awakened voice, and the renewed political engagement of young people. We have proven that young people can vote, and now we need to prove that young people do vote,” he said in issue one of Sin.

NUI Galway’s Students’ Union is willing to assist students in voting registration and in voicing their particular issues to local representatives.