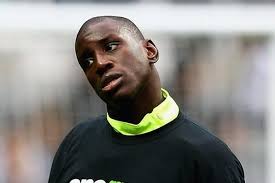 Recently we witnessed incredible luck at the hands (feet?) of Demba Ba. Ba receives a pass and dribbles forward a few paces before shooting, slipping and falling in the act. The keeper manages to save the shot but it rebounds off of Demba Ba’s rear and goes in, quite the lucky feat! Now anyone who hass played football or any other sport knows that if something like that happens to you there isn’t a second to waste, you need to smile and nod immediately to let everyone know that you meant to do that.

In that spirit we’ve decided to take a look at the top 5 luckiest goals:

Tomas Brolin is considered by many to be not only the worst signing for Leeds ever but one of the worst premier league signings ever. Despite all that, Brolin did score an amazing (read: lucky) goal for Leeds back in ’95, following a weak headed shot which slowly bounced towards the goal, Brolin followed up with a studs up shot which bounced off the keeper, again off Brolin who fell in the clash with the keeper before an attempted clearance struck Brolin and rebounded into the goal.

Darren Anderton spent most of his career as a midfielder for Tottenham although it was in one of his 30 appearances for the England national squad that he scored this amazing(ly lucky) goal. As Anderton is running to keep up with play after the ball is launched forward, moving so fast it’s hard to react with any purpose. When the ball bounces off his teammate’s face, Anderton has only a second to react and react he does, with a quick shot before the ball touches the ground which fires into the top left corner, quite the goal.

A great Italian footballer, Paolo Rossi, who won the golden boot when he led Italy to be World Cup champions in 1982, scores with another rebounded effort for Italy. A headed shot rebounds off the post straight to Rossi, but unfortunately his shot hits his teammate, stopping a goal. Incredibly fortunately though it bounces back and ricochets off his shin and into the goal.

Another international great, Bernd Hölzenbein, made his most famous plays for Germany, but it was for his mainstay club, Eintracht Frankfurt, that he accidentally scored this beauty. When a cross in to his teammate results in a weak header, Bernd is caught stumbling while trying to keep up with play in the box. Luckily though, he falls on his face in perfect time for ball to be fumbled by the keeper, Bernd is in perfect position to head the ball in from the ground. We’re starting to see a theme of slipping and scoring goals here.

Another lucky goal from the 1978 world cup and our first Brazilian goal on this list, in a match where Brazil are in complete control of the game, they are unfortunately met with misfortune at every turn. Every skilful shot strikes the post or crossbar and after a minute or so of this, Brazil finally receive some luck when a shot rebounds off the post and into the path of Roberto who can slot it home in the mostly open goal.

So that concludes our list of the top 5 luckiest goals of all time, agree with us? Or do you have better suggestions? Let us know in the comments section.