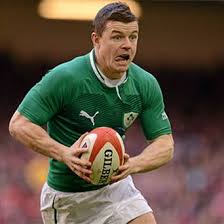 Brian O’Driscoll is the epitome of what it means to be a sporting hero.  Everywhere he goes he commands respect not because of an imposing or domineering stature but because he possesses what all athletes crave, pure unabashed focused talent along with an indomitable will that does not believe in giving up when faced with insurmountable odds.

From his teenage years there were stirrings that someone special was playing for Blackrock College, the birthplace of many rugby titans. He lit up the 1994 Leinster Junior Cup quarter-final when he appeared as a substitute and scored a try that involved two dummies. His prodigious skills were honed at this school waiting for an opportunity to shine on the professional stage.

It is rare but from the moment he burst onto the world stage with a hat trick of tries in Paris, the people of all four provinces knew that whatever their political or religious differences they were united in awe of O’Driscoll.  The only player in my lifetime who created a similar electric feeling in crowds when he got the ball for Ireland was former winger, Simon Geoghegan.   A Giant in Paris, yet still so young, so full of potential, that we dared to dream.  Playing as captain of Leinster and Ireland he continually raised standards and expectations in Irish rugby, while maintaining his glorious relationship with the Irish public.

Like Keith Wood before him or Roy Keane in football, O’Driscoll believed that the Irish were capable of beating anyone and I have no doubt that if every Irish player worked as hard, putting everything on the line in every match like him that we would be a nation of world cup winner’s right now.  However, men like Keane, Wood and O’Driscoll are that rare breed who lift up all those around them, leading through their actions on the pitch while being gentlemen off it.

The statistics speak for themselves: one hundred and forty one caps, 57 international tries, three Heineken cups, two six nations, including a grand slam and multiple triple crowns.  On Ireland’s battlefield O’Driscoll stood up to be counted and represented his country with the highest distinction.  Roving the pitch with his stalwart ally, Gordon Darcy, for club and country they transformed the centre position into a hybrid between back and forward winning ball at the breakdown where it had never been attempted before.

In his latter years as his pace slowly ebbed away we started to see the magic mind of O’Driscoll; where before he was a deadly finisher he now became a prolific creator of tries while continuing to punch way above his weight in any defensive tackle. Last year he was on a victorious Lions team that triumphed in Australia.  In the last match he was omitted from the team.  All of Ireland rose in uproar because of this shameful decision.  O’Driscoll once again responded as a man would hope to when faced with wide scale embarrassment.  Injustice or the right call is still wide open to debate, but in my opinion the Lions would have still won if O’Driscoll were allowed to renew his successful partnership with Jamie Roberts.

His last year on the international stage was a hard slog for O’Driscoll.  Without his blistering pace he had to refine all of his other skills to justify his place in the Irish team.  However, as a talisman and team player he is without peer.  He remained a solid defensive player with the capability of creating that try-winning pass with his creative flair.  Winning last year’s six nations was his last shot at climbing Everest.  As always, nothing less than winning was ever satisfactory for O’Driscoll.  He can retire in peace knowing that he gave everything he had to the sport he loved.  He elevated the game to a new level and inspired a nation through these dark times of recession.