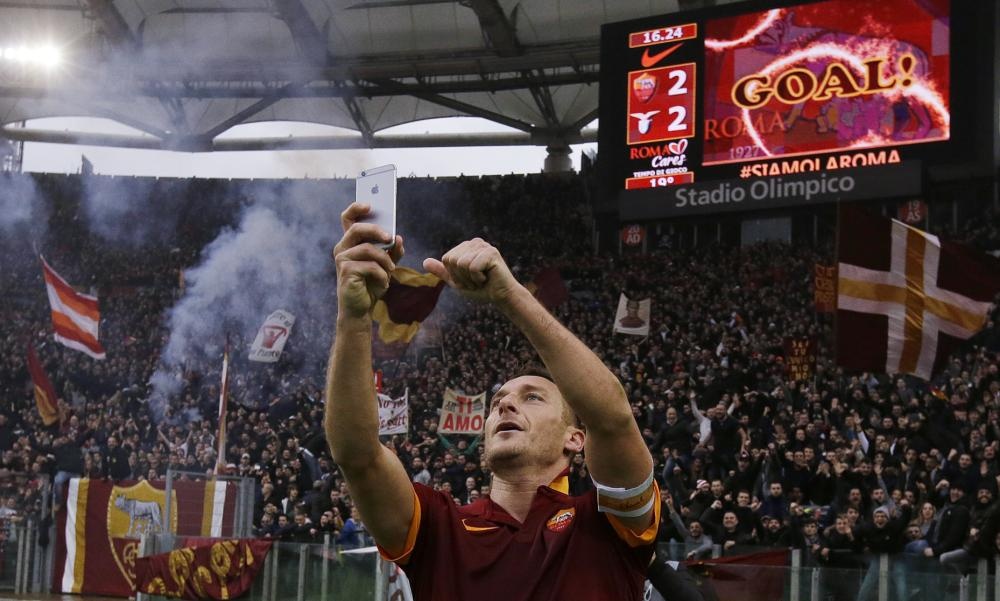 After Francesco Totti celebrated his goal at the weekend against Lazio by taking a selfie with the Roma fans, we here at SIN sport thought we’d take a look at 10 of the most famous (or infamous) football goal scoring celebrations.

Jimmy Bullard, I’m sure many will agree, has to be one of the funniest men in football. And this proved just that! After the infamous centre circle team-talk that manager, Phil Brown, gave his Hull City players at half-time at the Etihad the previous season, Jimmy decided to have a bit of a laugh at his gaffer after slotting away a penalty to bring the game to 1-1. He ran to the corner, his team-mates sat down around him in a pre-rehearsed fashion and Jimmy gave them all a good telling off. Unfortunately, Phil Brown didn’t take it that well and Jimmy has joked that his career went downhill from then on!

King Eric, as he was (and still is) known by the Old Trafford faithful, saw many great goals by the Frenchman throughout the years. However, the goal that preceded this celebration could be argued to have been his best. After picking up the ball on the halfway line and easily turning two Sunderland players, he played a one-two with Brian McClair before chipping the keeper from the edge of the box in a manner so nonchalant that it would make Zlatan Ibrahimovic look flustered. But the crown on the King’s goal was the way he slowly raised his arms triumphantly and accepted his standing ovation from every corner of the stadium, much like a gladiator. Nonchalance, popped collar, and a look that said ‘Yes, I know how damn good I am’; all the trademarks of this United legend in one celebration.

England demolished Jamaica in their final friendly before the 2006 World Cup, winning fairly comfortably, 6-0. This was obviously intended as a confidence boosting game, rather than a proper challenge, and nobody’s confidence was boosted more than hat-trick scorer, Peter Crouch. Well, you’d have to be confident to pull out the moves that he did. It’s fair to say that as robot’s go, Crouchy’s isn’t the worst. Although the gangly limbs of his 6’’7 frame certainly made it appear much goofier. Crouch has gone on to say he’ll only ever break it out again if England win the World Cup. So savour the video online, you’ll never see anything like it again.

‘When a postman delivers letters, does he celebrate?’ No Mario, they don’t! But when you score a screamer against Germany in a European Championship semi-final do you celebrate? Seemingly so! Mario’s ‘Why always me’ celebration could have also made this list (and with two famous celebrations to his name I’m starting to question his claim that he ‘doesn’t celebrate’) but the notorious shirtless muscle flexing of Mario after beating Manuel Neuer with a shot that was measured at roughly the speed of sound just shades this one, mainly due to the hilarity of ensuing internet memes.

In fairness to Mario, he doesn’t usually get too excited when he scores. Check out his distinct lack of excitement following his winner against Bologna to see what I mean.

The former German international player and manager came to Tottenham from AS Monaco at the start of the 94/95 Premier League season with a reputation as a bit of a diver. This was long before diving was commonplace in the league as it is now, so he faced a lot of stick from the very start. However, after a great header on his debut against Sheffield Wednesday, Klinsman’s celebration lead to two things in a sentence which before were not thought possible to be in the same sentence.; German and sense of humour. Klinsmann’s exaggerated, theatrical dive (not dissimilar to some of the poorer efforts of Arjen Robben, Ashley Young and the likes) showed a self-depreciating sense of humour which helped win the Brits over, as well as helping him win the 1995 Football Writers’ Association Footballer of the Year.

In footballing terms, 38 is ancient for an outfield player. And we all know old age and dancing rarely ends well. Roger Milla, for many, is an exception. After netting against Romania in the 1990 World Cup, he ran to the corner flag and began a display of gyrating hips that wouldn’t have looked out of place next to Elvis Presley himself. Milla carried on to score three more that would help Cameroon make history by becoming the first African nation to reach the quarter finals of a World Cup, as well as providing a bit of the fun, laughter and joy that African Nations tend to bring to the game.

Another, more recent example of African Nations bringing that aforementioned joy and colour to International tournaments is South Africa’s nicely choreographed dance routine after the opening goal of the 2010 World Cup in their own country. Certainly, when you think of the 2010 World Cup you might think of vuvuzela’s, Andrés Iniesta’s last gasp winner, or Holland accidently sending their rugby team. But one of the best images is still the hosts lining up on the touchline in front of a gigantic home crowd, thoroughly enjoying themselves. The images were shown around the world and became so famous that people seem to forget the goal that lead to the celebration wasn’t half bad either. It reflected the mood of the rest of the tournament and reminded us that it’s not all about money, but that football should be about having fun!

Going back to play an old club can be emotional in many different ways. It can be a humbling experience if your old fans still respect you. It can be difficult to remain professional and give your all for your new club if you still have a soft spot for your old one. However, Emmanuel Adebayor only appears to be soft in the head, so no worries of a diplomatic appearance and respectful applause from both sets of fans, give us the controversy! For various reasons, Arsenal supporters weren’t happy to see him again and booed him throughout the match. Emmanuel was obviously not too happy and after scoring a header at one end of the pitch he took off running to celebrate; Understandable, right? Until he kept running and running and running, all the way down to the other end of the pitch to knee slide in front of his hecklers, as he was bombarded with litter from the crowd. Naturally Arsenal fans were enraged, and City fans were thrilled with not just the goal but also the fact that it was probably the most they’d ever seen him run for the club.

When it comes to Roma players, the veteran Totti may have pleased the younger generation with his selfie, Alessandro Florenzi embraced the older generation (literally) after his finish against Cagliari. Now we in Ireland are as a nation always very found of our Nans. However, we all know how important famiglia are in Italy (Just look at the Dolmio ads). So when Florenzi’s nonna attended her first game at the Stadio Olimpico and he just so happened to score, he made a bee line for his grandmother in the stands to give her a big hug. Cue an audible ‘aaawww’ from both sets of supporters.

You’ll surely have seen these guys at some stage, even if you don’t know them by name. The Icelanders have recently won their national league and faced Inter Milan in a Europe League qualifier (which Inter won) but it’s certainly a sign that these lads aren’t just all about wacky celebrations (the bicycle and the fisherman amongst others) but they can also play a bit, whilst still injecting some fun and games into a sport which is all too often taken too seriously. I’d only be wasting your time if I tried to describe their numerous brilliant celebrations, so all I’ll say is YouTube them and enjoy!