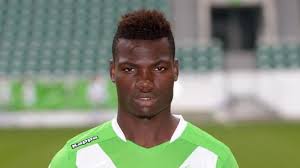 Followers of Belgian football and the Bundesliga were left in shock this weekend following the death of one of their bright young stars, Junior Malanda.

The 20 year old Wolfsburg and Belgian under-21, defensive midfielder, was killed when the car in which he was travelling, cleared a safety rail at the side of the road and collided with a tree at 3:35pm local time in icy conditions near Bielefeld in Northern Germany.

He was en route to the airport to fly out to Cape Town with his club for a training camp. The police have investigated the accident and reported that excessive speed in the dangerous conditions coupled with Malanda not wearing his seatbelt were the key factors in the incident.

Tributes have flowed in from around the footballing community from the likes of Mario Götze and Marco Reus, as well as from Belgian compatriots Adnan Januzaj and Everton’s Romelu Lukaku, who dedicated his midweek FA Cup goal against West Ham to Malanda, who grew up in the same neighbourhood as him in Brussels.

Malanda had been making an impression in his 15 appearances for Wolfsburg this season and was said to be knocking on the door of the senior Belgian national team.

Wolfsburg sporting director, Klaus Allofs said on behalf of the club, “We are all deeply saddened and our disbelief can hardly be put into words.” He also continued to praise Malanda’s “fun-loving” personality and said he was key to the good-spirit in the team. Allofs also explained that the club’s decision to postpone their training camp had been reversed, saying that it “would also have been in the spirit of Junior to keep working despite it being a tough time for all involved.”

Our thoughts here at SIN sport are certainly with Junior’s family, friends, and all those associated with VFL Wolfsburg at this difficult time.