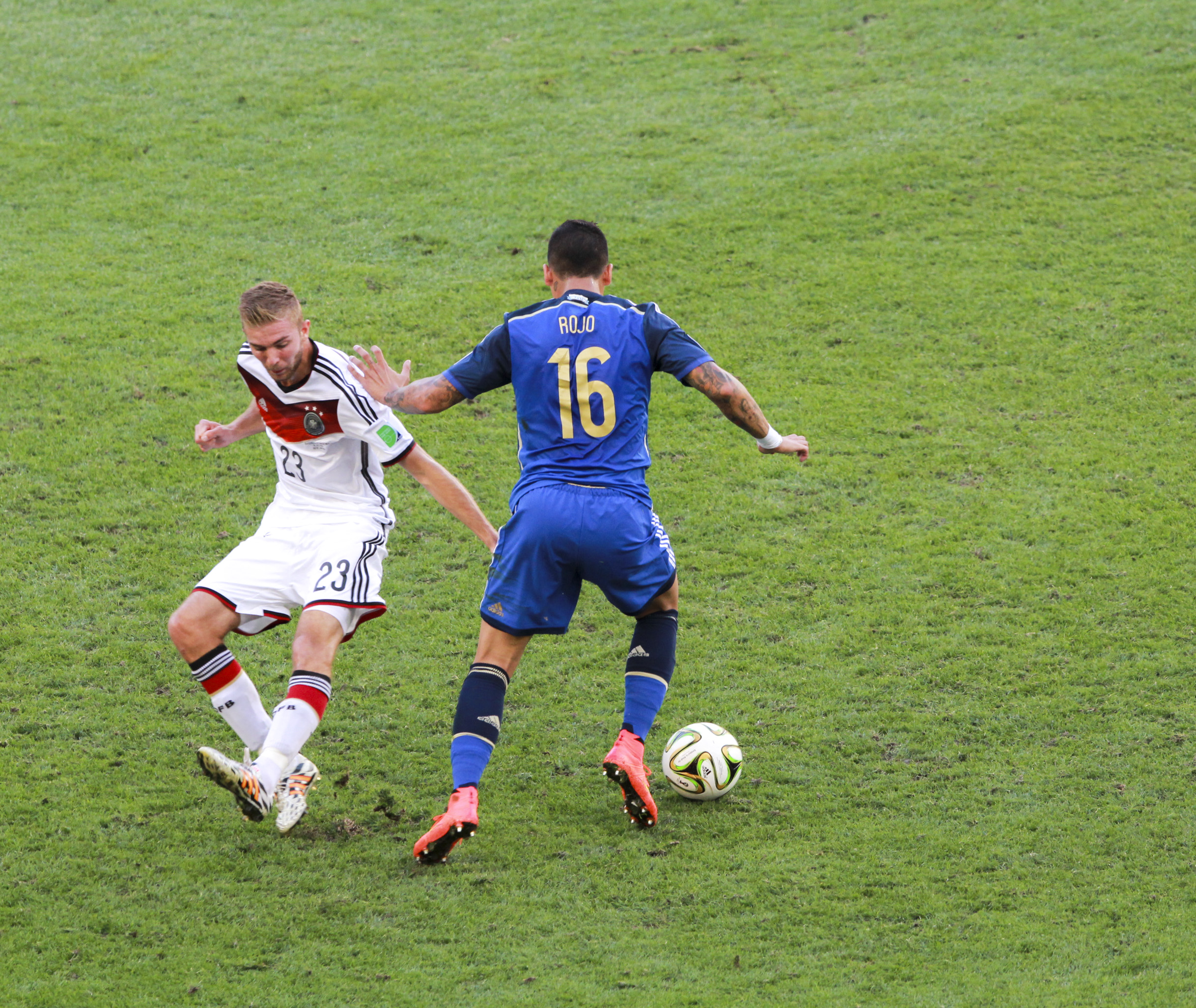 German international, Christoph Kramer scored one of the finest own goals you are ever likely to see. Kieran Kilkelly is here with some other majestic own goals.

It can be argued that most goals are unlucky in their own right but none come as close to the misfortune of the one goalkeeper Asaf Mendes scored against himself.

Lining out for Maccaiba Haifa in a friendly match against Dynamo Kiev in February of 2012 Mendes looked to have the situation in control, catching the ball before rolling it out in front of him to launch it upfield.

The ball went up but not upfield. To say that the conditions were windy is an understatement as the ball got caught in the strong breeze blowing against the Maccaiba Haifa keeper. Mendes, unable to judge the flight of the ball, flapped at it before it bounced into the net leaving him red-faced and dumbstruck.

If you felt any sympathy for the previous entry then prepare your heart to melt for Bury defender, Chris Brass.

It was April 2006 and Bury were lingering towards the bottom of League Two with only a handful of games to play; their Football League status was in jeopardy.

Up steps Brass to get on the end of a through ball by a Darlington midfield player. Facing his own goal and attempted clearance over his shoulder smashed Brass in the face and it bounced past surprised keeper Kasper Schmeichel.

Not to do things lightly, the Bury defender added injury to insult when it was realised that his failed acrobatic manoeuvre resulted in a broken nose for him and sympathy all round.

One bit of luck did favour Brass though as Bury managed to stay up on the last day of the season.

For our next culprit we must head to the Peruvian Premier League and a player called Renzo Reaños. You wouldn’t expect much quality in the top league in Peru but what the Unión Comercio player did was inexcusable.

A cross was floated in from the right where Reaños was on the cover and marking space in the centre of the box. His central defensive partner appeared to bring down the Universitario striker but nothing was given. Reaños mistakenly thought there was and in frustration tried to kick the ball away only for him to slice it past his own goalkeeper.

The ref pointed to the centre circle, the goal was given and Reaños and his teammates went on to lose the game 1-0…

Staying in South America, the Brazilian second tier provides us with the next hilarity. As with many Brazilians, the goalscorer himself only has one name; Izaldo.

Lining out for Nautico against Santa Cruz the 20 year old (now 21) decided that he would like to get on the score sheet, the only problem being he wasn’t getting enough chances at the opposition’s goal. With the youth of eagerness on his side he directed a cross forcefully towards the top corner of his own net only for it to rebound off the crossbar.

Thankfully for him though, it was headed back into the six yard box where Izaldo showed his goal poaching abilities and was there to meet and head it into the top of the net giving the youngster his first ever goal.

Jamie Pollock could also be a candidate for most sympathetic own goal scored but for the sheer quality he showed while scoring it.

A little touch over his own defender gave him a clear opportunity to head the ball back to the keeper. Unfortunately for Pollock (and Man City), the keeper was slightly off his line and Pollock’s header was a little too firm. An outstretched hand wasn’t enough and that goal condemned City to the third tier of English football and kept their opponents, QPR, safe.

Despite that it is still a goal to be proud of with the skill that was on display.

Whatever about solo goals there is nothing better than a team goal. A series of passes accompanied by a neat finish and you are seething with applaud for what you have just witnessed.

At the semi-final of the Chinese National Games last year between Xinjiang and Liaoning one of the most unbelievable team goals was scored by Xinjiang. Unfortunately for them, it was an own team goal.

You would think that a nation who practiced martial arts would be agile, acrobatic and flexible when it comes to kicking. Not the players of this Chinese team.

With just under a half an hour to go and the teams still level in this tight encounter, a long ball was headed on and fell to one of the Xinjiang players in his own box. Not to be undone by his heritage, he swung a leg at it as if he was in a karate fight. Luckily for him he was not, as he completely sliced the ball and probably pulled various muscles in the process.

But he knew he had room to show off with his teammate waiting in the centre to recover any mistake he might make. It is not clear in the video but relief came over his face as he saw it fall to his teammate.

Unfortunately for fans of Xinjiang, this player also had dreams of becoming a Kung-Fu champ and decided to bicycle kick it away. His attempted clearance was worst than the first but again, thankfully, it spun its way back to the goalkeeper.

A deft touch was what the keeper meant to do but instead he didn’t get enough on it and it rolled past his foot and into the net thus crediting them with the funniest team goal ever.

Also, they went on to lose the game 1-0 and a place in the final with that.

Here at Sin we are all about equality and we couldn’t have a post on own goals explicitly about men. Feminists just wouldn’t have that and men would complain that they were being ridiculed singularly.
Glódís Viggosdóttir of the Iceland women’s u-17 team at the 2011 UEFA Championship in Nyon is the person responsible for this goal.

With Spain 3-0 up in the semi-final the game was as good as over but Viggosdóttir removed any doubt with her “neat” finish.

Spain being Spain (regardless of what gender they are) have an uncanny ability to open up defences with their passing.

With space and time, a timid shot came towards the arms of the Icelandic goalkeeper. The keeper was unable to hold on and Viggosdóttir tried to clear the danger only for her first touch to be poor and ultimately end up in the back of her own net.

There can be some blame put on the keeper for not saving it but realistically you don’t mess around with the ball in your own six-yard box. She can be forgiven though (somewhat) as youth is on her side.

While it is enjoyable to watch all these own goals, none really are expert finishes. Well this next one from Festus Baise literally defies any logic or reason.
Baise, who lined out for Sun Hei against Citizen AA in a Hong Kong First Division match, can be accredited with one of the best goals ever scored irregarless of the fact it went into his own net.

As with most own goals that are scored it came from a cross; the ball in was a mixture of a floated and drill cross and that’s what caused the problem for the Sun Hei man.

Slightly off balance, Baise threw a leg at it as the ball was behind him and heading towards the edge of the box. What happened next was a thing of mystery.

A flick of the heel connected solidly with the ball and it floated in the air towards his own goal, lobbing his keeper and finding solitude in the left-hand corner of the net. Baise (and everyone else in the stadium) were in disbelief at what had just happened.

He has since tried to replicate the strike at the opposing end of the pitch but to no avail.

Sifting through clips you see some pretty bad howlers executed by keepers and defenders alike but none are as bad as this next one; I mean in every way it is terrible.

18 year old Radu Mitu was 10 minutes into his debut for Milsami Ursidos in the Moldovan First Division when it all started to go wrong.

A scuffed shot that was going well wide was scooped up by the inexperienced keeper just wanting to get a feel for the ball. Excitement at having it at his fingertips must have gone to his head as the simple task of throwing out the ball didn’t go so well.

It left his hands and headed towards the net with the young lad visibly fretting while trying to clutch on to it. But like a baby giraffe trying to stand for the first time, it just wasn’t happening and it landed into the vacant net.

Not a good day for the young keeper who also let in a last minute goal that resulted in his side losing the match 2-1.