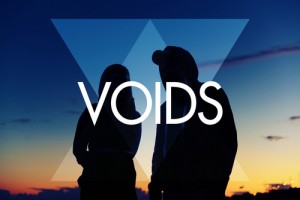 Sometimes, when you’re researching a band online and you can’t find any information on them, you start to get really frustrated with Google. I mean, we all know that we’re having all our information obsessively collected and stashed by the corporate monolith, which is obviously terrifying, but the upside of this should be that when I need some interesting information on a band to start a review with, I should be able to know everything about them, from what they eat for breakfast to their favourite café to nick sugar sachets from. However, it doesn’t play out like that in real life, and VOIDS are another band that facts are scarce on. So we’ll start with what we do have: they are from Galway. They are made up of a woman-person called Alison, who provides vocals, and a man-person called Andrew, who provides bass and various other instrumental bits. And they have an EP, Begin, which is the subject of this review.

Opening track ‘Begin’ is simultaneously lulling and disturbing, with the crash of breaking glass juxtaposing harshly against the subtle bass while vocals, reminiscent of some of Warpaint’s colder songs, coo ominously over the top: “Don’t, you, tell a lie”. It’s very sparse and minimalist musically, which can feel a bit thin until you realise just how much they’re managing to squeeze out of their set-up. So a song like ‘The Fear’ keeps almost the exact same repetitive percussive instrumental backing throughout the entire song, and invests all responsibility for its progression and propulsion into the vocals. And it works.

But it’s difficult to describe VOIDS’ music using the traditional song-by-song reviewing format, because the tracks on Begin occupy such a similar headspace that it’s hard to pry them apart and analyse them separately. VOIDS’ focus instead seems to be on creating an atmosphere, which they do with dark, synthetic instrumentals and unsettling repeated vocal refrains. As music, it’s almost too sedated for the nightclub scene. It actually seems better suited to the streets outside, music that feels most at home walking the city after dark. It’s emphatically night-time music, so much so that it feels like a crossing of day – night boundaries to listen to it while the sun’s out, like eating a 99 in Electric Garden. It takes some time to adapt to the Begin EP, but when you do it’s a rewarding and engaging listen.